Kids Encyclopedia Facts
Not to be confused with Upton Castle. 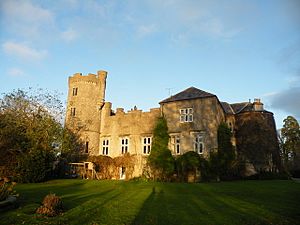 Castle Upton is situated in the village of Templepatrick, in County Antrim, Northern Ireland. It is around 12 miles (19 km) north-west of Belfast. Originally the site of a 13th-century fortified priory of the Knights of St John, the present building was constructed around 1610 by the Norton family who settled here during the Plantation of Ulster. Soon after, it was bought by the Upton family, later the Viscounts Templetown, who remained in possession until the 20th century. The castle was remodelled in the 1780s to designs by Robert Adam, who also designed the stable block now known as 'Adam Yard'. Upton was purchased in 1963 by Sir Robin Kinahan and Coralie de Burgh, by which time it was in a poor state of repair. Following restoration the Adam Yard was converted to housing, and the castle later opened as a wedding venue. In 2016 the property was placed on the market by Kinahan's son Danny Kinahan MP. The property is now owned by the Hughes family.

It is sometimes stated that Castle Upton contains parts of the earlier priory buildings, but other sources conclude that no part of the building predates the work of the Norton family. Even the existence of a house of the Knights of St John at this site has been questioned, due to lack of evidence. Sir Robert Norton, an officer under Sir Arthur Chichester, Governor of Carrickfergus, obtained lands along the Six Mile Water, and started work on the castle in the late 16th century, building what is now the east wing. This work was completed by Sir Humphrey Norton in the first part of the 17th century, and like many castles of the Plantation period was surrounded by a bawn wall.

The castle was purchased in 1625 by Captain Henry Upton, who had served under the Earl of Essex, and was renamed for his own family. Upton became Member of Parliament for Carrickfergus in 1634, and several of his descendants served as Members for Carrickfergus and for Antrim County. The family supported the protestant William III in the war against the Catholic James II. In 1776, Clotworthy Upton (1721–1785) was created Baron Templetown after serving in the household of Princess Augusta, dowager Princess of Wales. Lord Templetown commissioned Scottish architect Robert Adam to remodel Castle Upton in a castellated style. Although Adam never visited Ireland his scheme was mostly carried out, including alterations to the roof line and the addition of the north wing. Adam also designed a mausoleum and a stable block, comprising a double courtyard to the north-east of the house. This was completed in 1789, after John Upton had succeeded his father as 2nd Baron Templetown. He sat in the British House of Commons from 1802 to 1812 as one of two representatives for Bury St Edmunds, and in 1806 he was created Viscount Templetown. His successor Henry Montagu Upton, 2nd Viscount Templetown (1799–1863), commissioned Edward Blore to remodel the house in 1837.

During the first half of the 20th century, Castle Upton was sold by the Upton family. The Adam alterations to the roof were removed, and the Adam wing fell into disrepair. In 1963 the semi-ruined house was purchased by Sir Robin Kinahan, a prominent businessman and former Lord Mayor of Belfast, for £53,000. His wife, the artist Coralie de Burgh, guided the restoration of Castle Upton over the succeeding years. Improvements were continued by their son, Danny Kinahan and his wife Anna, who later opened the castle as a wedding venue. In 2016 the Kinahans placed Castle Upton on the market for £1.35m.

One side of the main street in the village of Templepatrick consists of the 18th Century demesne wall of Castle Upton. An impressive fortified gateway in the wall at the centre of the village leads up to the castle. The core of the main house is a tower house, originally thought to be part of a Commanderie of the Knights of Saint John (Hospitallers) with walls up to five feet thick, and the main bulk of the building was created in 1611 by Sir Robert Norton and originally known as Castle Norton.

One of the notable achievements of this castle is the reconstruction of the wrecked Adam wing. This wing, now contains a ballroom in which an Italian, marble chimney has been added. The owners of this castle obtained this chimney from Downhill Castle in County Londonderry. The stable block was built from exact architectural copies of the now demolished old Fish Market of Leith, near Edinburgh, Scotland.

The Templeton and Upton family mausoleum is in the care of the National Trust and is open to visitors. Many Templetown viscounts and barons are buried there. The mausoleum was built in the form of a triumphal arch by Robert Adam, who also extended the house in 1783. The surrounding graveyard contains the graves of such notables as William Orr (United Irishmens' Rebellion), and Josias Walsh, grandson of John Knox, the Scottish Reformer.

All content from Kiddle encyclopedia articles (including the article images and facts) can be freely used under Attribution-ShareAlike license, unless stated otherwise. Cite this article:
Castle Upton Facts for Kids. Kiddle Encyclopedia.