Castleton (Welsh: Cas-bach) is a hamlet in the city of Newport, South Wales.

Castleton is located in the Marshfield ward, an affluent region to the west of the city of Newport, also near St Mellons. The A48 dual carriageway is the main road through the hamlet. 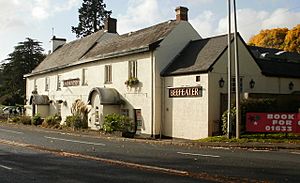 Castleton has a large, prominent Baptist chapel. It was at the Castleton Baptist Association meeting in 1816 that it was resolved to build the first Welsh Baptist Chapel in Newport, and the land then acquired in Charles Street, with the help of a bequest from John Williams, a Newport tailor.

Across the road, is a pub/restaurant, the Coach and Horses, on the A48. 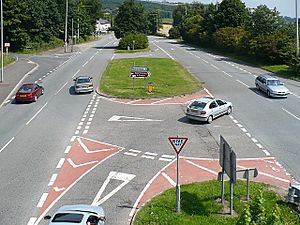 A48 dual carriageway passing through Castleton

The A48 dual carriageway is the main road through Castleton. The A48(M) motorway passes close to the north of the village. There are no motorway junctions on this short link between (M4) Junction 29 and Junction 29A at St Mellons.

The Great Western Railway station at nearby Marshfield acted as a rail connection, eastwards to Newport and onwards through the Severn Tunnel, terminating at London Paddington, and westwards to Cardiff and Fishguard Harbour. Closed since 1959, long before the Beeching cuts took effect, the nearest rail stations today are Newport and Rogerstone.

All content from Kiddle encyclopedia articles (including the article images and facts) can be freely used under Attribution-ShareAlike license, unless stated otherwise. Cite this article:
Castleton, Newport Facts for Kids. Kiddle Encyclopedia.