The Cathedral Basilica of St. Joseph (Spanish: Catedral Basílica de San José) is a large Roman Catholic church in Downtown San Jose, which serves as the cathedral for the Roman Catholic Diocese of San Jose in California, with the distinction of minor basilica.

The basilica is named for Saint Joseph, patron saint of the Catholic Church and namesake of San Jose, California. 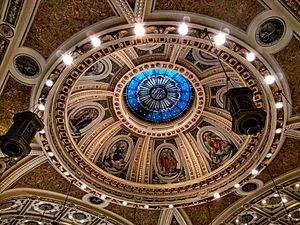 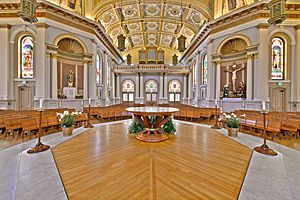 The original St. Joseph's Church was called San Jose de Guadalupe built on the site of the current basilica in 1803, and was the first non-mission parish built in California for the benefit of Spanish settlers instead of the Mission Indians (Ohlone). The Pueblo de San Jose de Guadalupe was connected with Mission Santa Clara by The Alameda which was part of the historic El Camino Real. The original adobe structure was damaged by earthquakes in 1818 and 1822.

In 1835, prominent Californio businessman Antonio Suñol donated the land at the northeast corner of the Plaza del Pueblo (modern Plaza de César Chávez) for the construction of a new, larger adobe church. Suñol, alongside his brother-in-law Antonio María Pico (who served as Alcalde of San José at the time), oversaw the construction of the church for the next eight years until its completion and consecration in 1846. In 1842, Suñol petitioned Francisco García Diego y Moreno, the Bishop of the Californias, for proper religious vestments and relics for the church. The second church was severely damaged by the 1868 Hayward earthquake

Work on the third church began in 1869. The third church was destroyed by fire in 1875, and a temporary fourth church was built a few blocks away while the fifth and current church was being constructed. The fifth church was dedicated by Joseph Alemany, Archbishop of San Francisco, in 1877 while construction continued. The current portico was completed in 1884, and the large dome was finished in 1885.

In 1981, a major renovation project was begun at the church, which was to become the cathedral for the new Roman Catholic Bishop of San Jose. In 1985, the church was elevated to a cathedral, pending completion of the restoration in 1990. It replaced Saint Patrick Proto-Cathedral Parish, located a few blocks away, as the cathedral of the diocese. The cathedral was made a minor basilica by Pope John Paul II in 1997.

The Cathedral Basilica of St. Joseph is listed as a California Historical Landmark and is listed on the National Register of Historic Places.

Just inside the entrance to the cathedral are two plaques that read:

The Most Rev. Joseph S. Alemany, O.P.
First Archbishop of San Francisco
dedicated Saint Joseph Church,
fourth on this site, on land
donated by Antonio Sunol for the
first permanent Catholic Parish
in California, founded in 1803.

The Most Rev. R. Pierre DuMaine
First Bishop of San Jose
dedicated this Church
restored and renovated
as the new Cathedral
of the Diocese of San Jose.

The top of the walls of the inside of the Cathedral include quotes from the Vulgate about Joseph:

All content from Kiddle encyclopedia articles (including the article images and facts) can be freely used under Attribution-ShareAlike license, unless stated otherwise. Cite this article:
Cathedral Basilica of St. Joseph (San Jose) Facts for Kids. Kiddle Encyclopedia.