Cathedral of Quito facts for kids 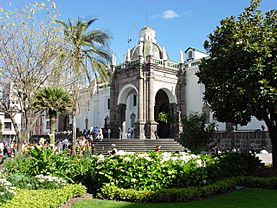 The northeast elevation of the Cathedral, on the Plaza, is dominated by the "Arch of Carondelet" entrance and its staircase.

The Metropolitan Cathedral of Quito (Spanish: Catedral Metropolitana de Quito), known simply as la Catedral, is the Catholic cathedral in Quito, Ecuador. Located on the southwest side of the Plaza de la Independencia (La Plaza Grande), it (and its older building) served as a seat of the Diocese of Quito from 1545 until 1848 when it became the Archdiocese. In 1995, it became the the Cathedral of Ecuador, making it the oldest Catholic church in the country.

The Cathedral is a white-painted monumental church with one high belltower to the right of the main entrance. It was built on a plan that has three longitudinal naves with semi-ogival arches on square pillars. The Cathedral is built like the kind of the 16th century. Based on interior features — like the details of the pillars, arches, and the carved and coffered ceiling — some experts say that the Cathedral should be thought of as Gothic-Mudéjar in style. It has Gothic features in the pointed arches of its naves, as well as in the ambulatory that goes around the presbytery.

All content from Kiddle encyclopedia articles (including the article images and facts) can be freely used under Attribution-ShareAlike license, unless stated otherwise. Cite this article:
Cathedral of Quito Facts for Kids. Kiddle Encyclopedia.