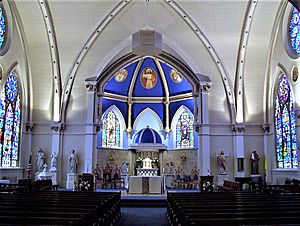 The first renovation happened in 1944, when stenciled designs were painted in the sanctuary and apse. The Diocesan offices were added in 1956 between the cathedral and the rectory, which was built circa 1908 after the cathedral was finished. but the stenciling was covered up and two sacristies were removed. During the third renovation in 1980, a screen was installed in the sanctuary and the tabernacle moved to the side. The fourth renovation began in 2007.

All content from Kiddle encyclopedia articles (including the article images and facts) can be freely used under Attribution-ShareAlike license, unless stated otherwise. Cite this article:
Cathedral of Saint Francis de Sales (Baker City, Oregon) Facts for Kids. Kiddle Encyclopedia.