Cathedral of St. Mary of the Assumption (Fall River, Massachusetts) facts for kids

The Cathedral of Saint Mary of the Assumption, colloquially known as Saint Mary's Cathedral, is a historic church located in Fall River, Massachusetts. It is the cathedral and a parish church in the Diocese of Fall River. Built from 1852 to 1856, the cathedral and adjacent rectory were added to the National Register of Historic Places in 1983, as St. Mary's Cathedral and Rectory. It is the oldest extant church building in the city of Fall River, and was one of the city's first Catholic parishes. The cathedral is dedicated to the Blessed Virgin Mary under the title of Our Lady of the Assumption. 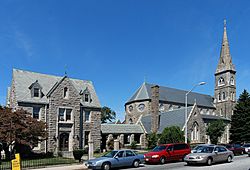 The rectory (left} and cathedral (right).

There were not enough Catholics in Fall River in the early 19th century to form a parish, so they were visited occasionally by a visiting priest. Property was finally acquired in 1835 from Peter McLarrin for $659. The parish of St. John the Baptist was established in 1838 and a small frame church building was constructed. Large numbers of Irish immigrants came to Fall River in the 1840s to work in the mills and they soon overwhelmed the small church.

Bishop John Fitzpatrick of the Diocese of Boston, which covered all of the State of Massachusetts at the time, laid the cornerstone for the present church on August 8, 1852, at the site of St. John the Baptist Church. The old church remained in place and continued in use while the new church was built around it. When it was time to put on the roof, the old church was dismantled and rebuilt in a near-by location. Parishioners helped in the construction of their new church. Bishop Fitzpatrick returned to dedicate the new St. Mary's Church on December 16, 1855. Finishing details were not completed until December of the following year, and the steeple was unfinished until 1858. In 1872, St. Mary's became a parish in the newly created Diocese of Providence. In 1901, Bishop Matthew Harkins of Providence consecrated the sanctuary, and in 1904 Pope Pius X named it the cathedral church of the newly founded Diocese of Fall River, its seat first held by Bishop William Stang.

The rectory and diocesan offices are attached to the rear of the cathedral by a colonnade. The original rectory was a Stick style residence. It was replaced in 1927 by the current rectory.

The cathedral is one of several grand Catholic churches built in the city during its heyday as an industrial center, including St. Anne Shrine, Good Shepherd Church (formerly Saint Patrick's), Sacred Heart Church, Espirito Santo, and Saint Joseph's Church, as well as several that have since been lost, including St. Matthieu's in the North End (taken by eminent domain in the 1960s) and Notre Dame de Lourdes in the Flint, which was destroyed in one of the city's most famous conflagrations on May 11, 1982.

St. Mary's Cathedral was designed by prominent Brooklyn, New York church architect Patrick Keely in an “Early English” mode of the Gothic Revival style. He later designed St. Joseph (1880) and St. Patrick (1881-1889) churches in Fall River. The cathedral and the entire steeple are stonework composed of native granite. The naves are covered by a shingled roof. The building measures 126 by 76 feet (38 by 23 m) and the spire rises to a height of 190 feet (58 m). The main entrance is set in a shallow gabled frontispiece. Above it on the main facade is a rose window in the main gable.

The rectory was designed by the Boston architectural firm of Maginnis & Walsh. Like the cathedral, it was designed in the Gothic Revival style and its exterior is clad in granite.

All content from Kiddle encyclopedia articles (including the article images and facts) can be freely used under Attribution-ShareAlike license, unless stated otherwise. Cite this article:
Cathedral of St. Mary of the Assumption (Fall River, Massachusetts) Facts for Kids. Kiddle Encyclopedia.