Cave of the Winds (Colorado) facts for kids 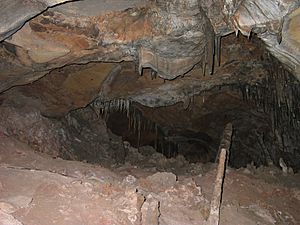 Speleothems inside the cave

Cave of the Winds is a cave in the Pikes Peak region of Colorado. It is located just west of Colorado Springs on U.S. Highway 24, near the Manitou Cliff Dwellings. Tours of the complex of caves are given daily. 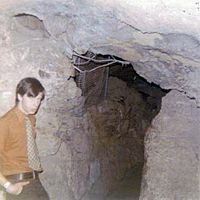 A tour guide leads a party of visitors through Cave of the Winds (May 1972).

By far the most famous section of the Cave of the Winds is the Silent Splendor room. Discovered in 1984, the room contains numerous rare crystalline speleothems including helectites which appear to defy the laws of gravity by growing in strange directions and not being forced down by gravity like many cave formations. Unfortunately, the room must be sealed off from the general public in order to maintain its delicate environment. Silent Splendor is sealed from public view by an "environmental gate" with a large tube that seals in moisture to maintain the atmosphere necessary for the delicate formations to continue to grow.

In the late 1980s a few new passages were opened inside the cavern. On May 8, 1988, Mother's Day, a chamber called the "Adventure Room" was opened. Left in a more natural state than most of the cave, the Adventure Room has dirt floors, lower numbers of lights (compared to other chambers inside the cave) and gives entry to the Manitou Grand Caverns where Lantern Tours are given.

In 1989, a new passage named "Old Curiosity Shop" was opened, billed as the most narrow passage in the Cave of the Winds. Traversing it gains a look at the "Colorado Rose", a beaded helectite, and "Spider Web Valley", a collection of delicate helectites. This passage was opened to make tour groups moving through "Tall Man's Headache, Fat Man's Misery" a little easier.

Other lesser known attractions include a "bottomless pit," often the scene of practical jokes by the guides. The site also features a free-fall amusement ride called the Terror-Dactyl. 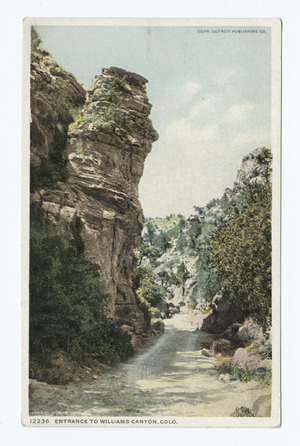 It is believed that both Apache and Ute Native Americans knew about the cave. The name, Cave of the Winds, relates to a legend involving the Apache, who were said to believe the cave was the home of a Great Spirit of the Wind. The first documented mention of the cave came in 1880 when two brothers, John and George Pickett, discovered the cave during a hike in Williams Canyon led by the Rev. Roselle T. Cross, pastor of the Congregational Church in Colorado Springs. The boys noticed that their candles flickered in a small shelter cave they had found and wind was seen to be blowing from a nearby crevice. Crawling through the opening they emerged into a large chamber. Within a few days Cross wrote about the discovery of the cave in his church newsletter and his story was immediately reprinted in the Colorado Springs Gazette of July 2, 1880. The Colorado Encyclopedia relates: "Although Cross exaggerated the heights and depths of vertical elements, as do most inexperienced cavers, his account is remarkably free of the florid Victorian hyperbole typical of most cave descriptions of that time. Cross and his Boys’ Exploring Association explored most of the horizontal passages accessible from the original entrance, a distance of about 200 feet—a respectable distance for schoolboys using candles." 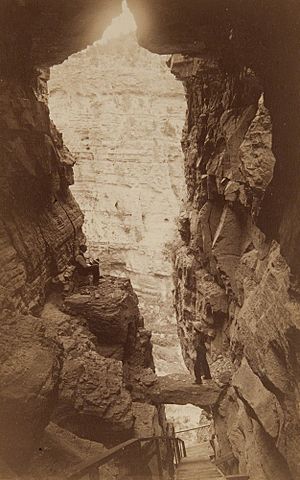 In 1880, the same year that the cave was discovered, George Washington Snider, a stonecutter from Ohio who had traveled to Colorado seeking his fortune visited the cave. Snider excavated passages from the Williams Canyon caves, as they were then called, and discovered "Canopy Hall" -- a large room nearly 200 feet long containing thousands of stalactites and stalagmites.. Snider wrote, “It was as though Aladdin with his wonderful lamp had effected the magic result." Unfortunately Snider spoke of his discovery in town and the next day the cave was mobbed by townspeople who stripped the cavern of many of the stalactites.

Snider continued to excavate and began preparations for guided tours. The Cave of the Winds quickly became one of the established attractions of the young Manitou resort area. Cave of the Winds has been in continuous operation since 1881 – making it one of Colorado’s oldest visitor attractions. Electrical lights were added in 1907, and visitors began traveling to the cave in even greater numbers – first by carriage and railroad, and later by car. 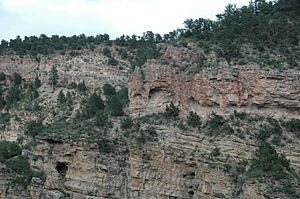 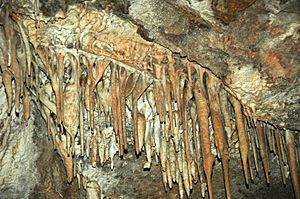 About 500 million years ago during the Ordovician period warm shallow seas covered the Pikes Peak region of Colorado. The seas were home to abundant shell creatures that accumulated on the sea floor when they died. The layers built up for millions of years and were eventually compacted and hardened into the rock known as limestone. The geological name for the limestone layer found in the cave is Manitou Limestone. 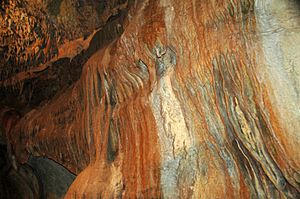 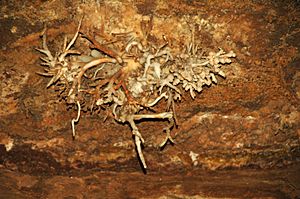 As the water table dropped within the cave system air began to fill the passageways and caverns. Stalactites formed on the cave's ceilings as calcium carbonate-rich water dripped leaving thin calcite rings that grew into icicle-like shapes over thousands of years. Through the same process stalagmites grew from the cave floors. A third type of structure is called flowstone. Flowstone formations are curtain-like formations that flow along the sides of caverns or passages. They are the most common formation found in "solution caves" in limestone, such as Cave of the Winds. Sometimes called draperies or curtains, they are formed over thousands of years as the mineral-rich water flows over surfaces leaving calcite behind.

The rarest and most delicate formations are called helictites. Helictite forms have been described in several shapes: "hands", ribbon helictites, saws, rods, butterflies, curly-fries, and "clumps of worms". They can be easily broken by the slightest touch and consequently are set away from tour groups. As helictites grow, they change their axis from the vertical at one or more stages of growth, hence the "clumps of worms" description for one type. Several theories as to how and why they defy gravity have been suggested but no theory has yet been proven to be correct.

All content from Kiddle encyclopedia articles (including the article images and facts) can be freely used under Attribution-ShareAlike license, unless stated otherwise. Cite this article:
Cave of the Winds (Colorado) Facts for Kids. Kiddle Encyclopedia.