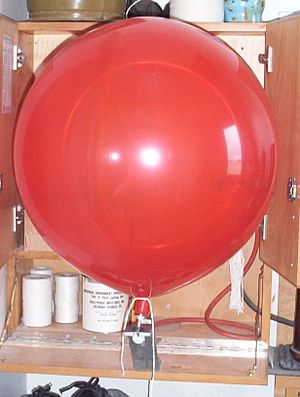 A ceiling balloon also called a pilot balloon or pibal, is used by meteorologists to determine the height of the base of clouds above ground level during daylight hours. In the past, and sometimes today, a theodolite was used to track the balloon in order to determine the speed and direction of winds aloft. The principle behind the ceiling balloon is that timing of a balloon with a known ascent rate (how fast it climbs) from its release until it disappears into the clouds can be used to calculate the height of the bottom of the clouds.

How it is used 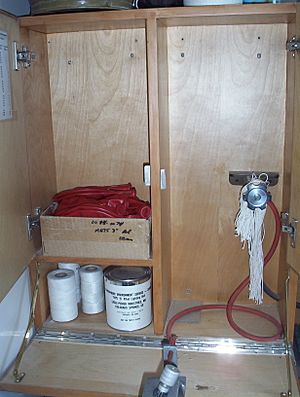 A ceiling balloon is a small, usually red, (fluted) rubber balloon commonly measuring 76 mm (3 in) across prior to inflation, inflated to ~40 cm diameter. After inflation the balloon is taken outside and released. By timing the balloon from release until it enters the cloud a ceiling height can be obtained. When correctly inflated the balloon will rise at rate of 140 m/min (460 ft/min). The bases of clouds are very rarely flat and solid, so the ceiling height is not when the balloon disappears but when the colour begins to fade. The balloon can also be used to measure the vertical visibility into a layer of fog or blowing snow. In this case the balloon will begin to fade as soon as it is released, so the vertical visibility is when the balloon disappears. If the balloon is visible for a considerable distance into the cloud layer the observer should make note of it as it is of importance to aircraft.

The ceiling balloon is a reliable, safe and simple way to get an indication of the height of clouds. However, it does suffer from some disadvantages that the observer must be aware of. Rain and wet snow may slow the ascent of the balloon, giving a falsely high ceiling and high winds and poor visibility may cause the balloon to appear to enter the cloud before it actually does. As the balloon rises at a rate of 140 m/min (460 ft/min) it will take over five minutes for the balloon to reach 700 m (2300 ft). Beyond this height the ability to follow the balloon, even with binoculars, is poor, as even the slightest movement of the eye off the balloon will almost certainly ensure that it vanishes.

At night when it is not practical to use a balloon the ceiling projector is used. However, during twilight it may be impossible to use the ceiling projector and then a pibal (pilot balloon) light may be used. This is a simple flashlight bulb attached to a battery. To charge the battery it is immersed in water for three minutes and then tied to the balloon prior to inflation. These are rarely used today.

All content from Kiddle encyclopedia articles (including the article images and facts) can be freely used under Attribution-ShareAlike license, unless stated otherwise. Cite this article:
Ceiling balloon Facts for Kids. Kiddle Encyclopedia.