Celeste Rizvana Buckingham (born May 3, 1995) is a Slovak singer and songwriter of Swiss-American origins. The former finalist of Česko Slovenská SuperStar (2011), Buckingham gained early recognition on the second season of the Czech and Slovak reality television series SuperStar, co-produced for audiences of the two nations. Even though eliminated from the talent contest, having placed tenth, she promptly established herself as a self-supporting artist. Her first singles, "Blue Guitar" and "Nobody Knows", each found a top-ten response on the component airplay chart in her home country, and so did her first collaboration with Majk Spirit on "Ja a ty", recorded for the rapper's studio album Nový človek. Nevertheless, her mainstream record followed the eventual release of her full-length debut entitled Don't Look Back (2012).

Issued to favorable reviews on EMI Czech Republic, the set experienced a moderate success commercially, peaking at number thirty-seven on the Top 50 Prodejní. Unlike its lead single, "Run Run Run", which climbed up the national charts in both fellow territories to number two, overall being ranked as the most played song for any Slovak performer in the respective year, or rather second in the Czech neighborhood. The composition also earned a number of nominations, most notably at the 19th MTV Europe Music Awards, making Buckingham the only female nominee within her own category, with four nominations in total at the local Slávik Awards. Some of those however acknowledged her general achievements in the music industry, such as the category New Artist of the Year, her winning at the ceremony.

Her subsequent outputs garnered attention within their format. Among them were a track recorded for AMO group, "Swing", and a solo single called "Never Be You". Her most recent release, "I Was Wrong", serves as her second duet with Spirit. In addition to performing arts, Buckingham is also an occasional host and model, and is a co-author of children's literature with one published work, The Lost Princess (2007), written with her sister Carmel, issued by Divis-Slovakia. On stage, one of the singer's most characteristic features is her barefoot performances, influenced by Joss Stone.

Let's put it this way – I'm a stranger who has lived in Slovakia for a very long time, and has learned the local language. I've managed the accent quite well, though I still make grammar mistakes. When mum and dad put me in kindergarten, I couldn't speak Slovak at all, it was too hard for me. I still remember that children would laugh at me. But eventually, I managed it [...]."

Celeste Rizvana Buckingham was born on May 3, 1995 in Zurich, Switzerland to the parents from different multicultural backgrounds. Her father, Thomas (born 1954), is a Chicago-native American with British-Irish origins, and her mother Zarin (born 1961), whose ancestry originates partly in Russia, is of Iranian descent. Celeste is a naturalized citizen of Switzerland, thus holding multiple citizenship herself. According to Celeste's own words printed in MF DNES, her mother had left her native Iran in exchange for the Swiss Confederation, reportedly in her mid-teens. While she was abroad, she met her soon-to-be husband, at that time University student, with whom she later moved to Alaska. Buckingham would spend her early childhood in Anchorage, where her father worked as a cardiologist. In 1999, the Buckinghams relocated to the European continent. Her father accepted a job offer, settling the family in Slovakia. For an interview published on August 29, 2012 in Slovak national daily newspaper SME, the singer recalled: "When we were yet little with sister, we lived in Alaska. Before our parents lived in Switzerland for a while, constantly thinking about them returning to Europe. However they wouldn't be longer attracted to Switzerland, and so they were considering where else, well, they could settle. The choice felt upon Slovakia as my father-doctor had gotten a job over there, which was a fundamental precondition to support his family. Originally we supposed to stay [there] only for a year, so then we will see. And [t]here we are for nearly thirteen years already." Since the age of three, Buckingham was raised with her younger sister, Carmel, in their foster country. Growing up in Borinka, a nearby village of the capital Bratislava, she was encouraged to take lessons in classical ballet and Latin dance. Later she began playing musical instruments, such as guitar and piano. 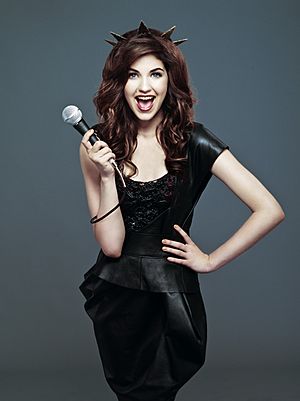 Buckingham made her public debut in the field of juvenile literature. In 2007, at the age of twelve, she crafted with her younger sister a short story, chronicling the adventures of the princess Lilly and her "lost" little sister, Blossom. Inspired by a L. Frank Baum book, The Lost Princess by Celeste and Carmel Buckingham was published on October 1, 2007 by Divis-Slovakia. Shortly after its paperback release, the girls' father summarized the result for Amazon.com, stating in his review: "The story is about the kidnapping of the younger of 2 sisters and how the older sister is able to find her and bring her back to her family. The characters have many adventures and go thru [sic] many difficulties before their family is reunited. The characters must grow and become stronger thru [sic] these difficulties [...]." Their picture book illustrated by Georgina Soar would not attract particular attention, and neither of the daughters would reprise their attempt in the literary genre.

Instead, Buckingham gradually started writing acoustic songs on her own, some of which would later result in a child "album", while with her sister she set up their off-stage band Anchorage, named after the city in Alaska they once resided in. One of her first rough demos, "Blue Guitar", had reportedly been written when she was twelve. Despite developing a passion for music in her teen years, she was said not to have been a happy teenager. When questioned in 2013 by Radka Červinková from Mladá fronta DNES, she disclosed that it was mainly due to a struggle over ongoing concerns with her self-confidence at that time. "Guess it's hard to believe, but there were times when I felt so alone, because I thought I'm not good enough for anyone, that everything I do is wrong and I'll never accomplish anything. ...Between the twelfth and fifteenth year I was a constant gloom-and-doom, and [I] wouldn't know what to do with myself. Only one thing saved me – the idea that I'm a quite good singer." Until the time her career-making moment arose, she was educated at the Forel International School, which was founded by her own mother, a devotee of the Baháʼí Faith.

I auditioned for the contest, hoping to sing and leave once the people get tired of it, and that's it. But it was much harder and not all about the music. We had no choice of songs, had to learn fast, then waiting for hours and hours, screaming directors, fights between us contestants, and even a fair amount of the gossip press who speculated about relationships. We were all nerves, hungry and sick. When I got home tired out after three months, I supposedly wasn't myself. At that time I seemed unaware of it, but my family feared for me. Well, if you aren't ready for this, it'll beat you out."

Taking an advice from record producers Martin Šrámek and Andrej Hruška, both of which would soon become her mentors, Buckingham decided to audition in 2010 for season 2 of Česko Slovenská SuperStar, a co-production of the UK series Pop Idol.

2014: Where I Belong era and judging in Czech-Slovak X Factor

She received a nomination at the Radio Disney Music Awards in the Best New Artist category; the awards were held on April 27, 2014. On March 3, she released her new single named "I'm Not Sorry" from the album Where I Belong and dedicated it to all women for International Women's Day. In spring she guest starred in the Slovak television series Panelák.

All content from Kiddle encyclopedia articles (including the article images and facts) can be freely used under Attribution-ShareAlike license, unless stated otherwise. Cite this article:
Celeste Buckingham Facts for Kids. Kiddle Encyclopedia.