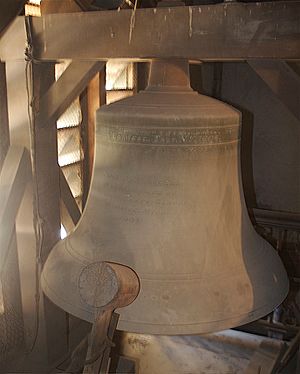 Johnson designed and manufactured these tower clocks at his machine shop in Manistee, Michigan. He built the clocks by himself and had no employees. Because of this he had low overhead and was able to underbid his competitors many times and obtain the order. The chief competitors of his in tower clock manufacturing were E. Howard & Co. of Boston and Seth Thomas Clock of Thomaston, Connecticut. These firms had large tower-clock departments and large department overhead as well. They were usually considerably greater than Johnson's and he was often able to underbid them. The actual bells he used in his striking clocks were from well-known bell founders such as Meneely in Troy, New York or Chaplin-Fulton bell foundry of Pittsburgh.

One of his tower clocks is that installed in 1906 by Nels Johnson at the Mason County Courthouse in Michigan that is still in use as of 2010. This tower clock he had originally installed in the Congregational Church at Manistee, Michigan, in 1892. The church had the clock removed in 1905 when they received a new clock.

He also has one of his clocks at the Lutheran Church in Rochester, N.Y., one at Fond du Lac, Wisconsin, three in Milwaukee, one in Big Rapids, Michigan, and one in Postville, Iowa. One of his finest clocks was in the famed Fort Street Union Depot railroad station of Detroit, Michigan.

Johnson made about 50 to 60 tower clocks. Some are:

There are two known international installations. One in Chengtu, China, installed in 1914 and another at the Isabella Thoburn College in Lucknow, India in 1910. Johnson did not go to these locations to install these clocks, though he did go and set up his tower clocks himself in every instance when they were installed in the United States.

Cheboygan county courthouse building was sold to a paper company and taken down in 1970 for a parking lot. The Lyman Block & Post Office were taken down and replaced in the 1930s. Detroit Post Office was located at Shelby & Fort Streets in downtown Detroit, Michigan, and demolished in 1931. The San Jose Post Office became the San Jose Museum of Art and the tower clock still exists. The U S Custom House of Memphis, Tennessee, built in 1885, is now the Cecil C. Humphreys School of Law and the tower clock still exists.

All content from Kiddle encyclopedia articles (including the article images and facts) can be freely used under Attribution-ShareAlike license, unless stated otherwise. Cite this article:
Century tower clock Facts for Kids. Kiddle Encyclopedia.