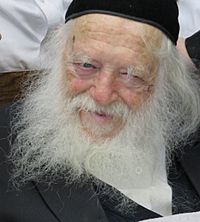 Shmaryahu Yosef Chaim Kanievsky (born January 8, 1928) is a Polish-born Israeli rabbi and posek. He was born in Pinsk, Second Polish Republic, but his career is set in Bnei Brak, Israel. Kanievsky is thought to be a leading authority in Haredi Jewish society.

All content from Kiddle encyclopedia articles (including the article images and facts) can be freely used under Attribution-ShareAlike license, unless stated otherwise. Cite this article:
Chaim Kanievsky Facts for Kids. Kiddle Encyclopedia.