Chamath Palihapitiya (born 3 September 1976) is a Canadian-American of Sri Lankan origin. He is a venture capitalist, engineer, SPAC sponsor and the founder and CEO of Social Capital.

Palihapitiya was an early senior executive at Facebook, working at the company from 2007 to 2011. Following his departure from Facebook, Palihapitiya started his own fund, The Social+Capital Partnership, through which he invested in several companies, including Yammer and Slack. The Social+Capital Partnership changed its name to Social Capital in 2015. He is a co-host of the podcast All In.

Palihapitiya was born on 3 September 1976 in Sri Lanka and moved with his family to Canada at the age of six. He attended Lisgar Collegiate Institute and graduated at the age of 17.

After graduating from the University of Waterloo in 1999 with a degree in electrical engineering, Palihapitiya worked for a year as a derivatives trader at the investment bank BMO Nesbitt Burns. He then changed jobs to one under Winamp and moved to California.

Palihapitiya joined AOL, becoming the company's youngest vice president ever, heading its instant messaging division in 2004. In 2005, he left AOL and joined Mayfield Fund; a few months later he left that job and joined Facebook, which was then a little more than a year old. Palihapitiya's work at Facebook involved trying to increase its userbase.

Steven Levy wrote in Facebook: The Inside Story that Palihapitiya was regarded as a "bully" at Facebook, and that he had made many of his subordinates cry regularly.

During his time at Facebook, Palihapitiya invested in several startups through Embarcadero Ventures, a venture capital fund. In 2010, Palihapitiya helped to buy the Golden State Warriors for $450 million; he remains a minority stakeholder and board member of the team.

In 2011, he left Facebook and started his own fund, The Social+Capital Partnership, with his then-wife. The firm changed its name to Social Capital in 2015. Through the fund, Palihapitiya invested in a number of companies, including Glooko, Inc, Yammer, SecondMarket, Slack, and Box. As of 2015, the fund had more than $1.1 billion in total assets most of which came from external investors (i.e. LPs). 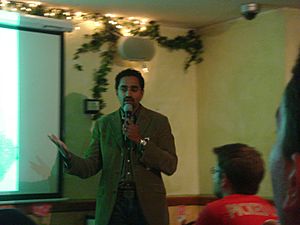 In 2018, there was a massive decrease in Social Capital fund's operations and a significant exodus of top management and co-founders. Axios reported that Palihapitiya was spending a significant amount of time with his new girlfriend in Italy and rarely showed up to the office or answered emails from employees. The firm returned investor capital and converted into a family office although continued to manage some external capital on a no-fee basis.

In 2019, an Ontario judge ordered Palihapitiya and two former partners to pay $15.69 million to plaintiffs in an Ontario Superior Court ruling that found the three had conspired to acquire mobile software development shop Xtreme Labs at a discounted price, in addition to breached contractual obligations with EVP. In December 2019 Palihapitiya stepped down as a member of the board of directors of Slack.

Palihapitiya previously said that he reserved symbols all the way from IPOA through IPOZ.

In March 2021 Palihapitiya sold his personal stake Virgin Galactic for around US$213 million.

In 2021, Palihapitiya announced he planned to help take SoFi, a financial services platform, and Clover Health, a Medicare insurance company, public through SPACs. This gained Palihapitiya criticism from the Financial Times, which said that he is "shilling risky reverse-mergers to retail investors on a almost bimonthly basis". 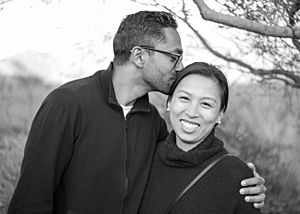 Palihapitiya with then-wife Brigette Lau in 2016

Following the Clover Health SPAC, Hindenburg Research, a financial analyst and short-selling specialist firm, issued a report about this transaction accusing Palihapitiya of luring investors into a “broken business”, argumenting that he failed to inform them about an active Department of Justice investigation into Clover’s alleged deceptive business practices. Palihapitiya made more than $290 million from the deal based on a $25k investment. In addition the Clover Health co-founder/CEO's previous company, CarePoint Health, a hospital conglomerate in New Jersey, was accused of price gouging customers and according to a NJ state commission siphoning off $150 million to himself and his friends bankrupting the company and causing a hospital crisis in NJ. Regulators in NJ called for an investigation of Clover Health because of the CEO's previous actions. The Securities and Exchange Commission opened an investigation into the allegations set forth in the Hindenburg Research report on 4 Feb. When asked about the allegations, Clover Health CEO Vivek Garipalli went on a expletive ridden tirade with a Forbes reporter.

On 6 March 2021, Yahoo Finance reported that Palihapitiya reflected that "his relative performance vs the S&P500 [was] 3.6% compared to 2.3%, or 56% above the benchmark." It was later criticized by venture capitalists, investors, and financiers that his reporting of his statistics as 56% above the benchmark, rather than as 1.3% above the benchmark, which they stated could be seen as 'inflationary,' 'non-kosher,' or 'manipulative of Main Street's view of him as an investor.'

In April 2021, John Coates, acting director of the SEC’s corporate-finance division, criticized Palihapitiya's views on the benefits of SPACs over traditional IPOs:

Some — but far from all — practitioners and commentators have claimed that an advantage of SPACs over traditional IPOs is lesser securities-law liability exposure for targets and the public company itself.

Coates clarified that a judge could rule a SPAC is similar enough to an IPO that the lesser securities law liability would be void.

Palihapitiya was listed as one of the "Founders" of the lobbying group FWD.us. The group launched on 11 April 2013, and its goals include immigration reform, improving education, and enabling technological innovation, all in a United States context. An article in The New Republic stated that Palihapitiya received a weekly report about FWD.us and also quoted him as saying, in response to controversy around the FWD.us political lobbying strategy: "The folks that are actually people that run that day to day are sophisticated and understand the nuances of how to affect it... It's a really gnarly, gnarly thing having to deal with Washington. And to be honest with you, my perspective was, it's a really good investment because it's a good way to pay it forward, and I'm really glad there are other people other than me who are dealing with it who have the patience and resolve to figure it out."

On 31 January 2021, Palihapitiya tweeted that he supported cutting the capital gains tax rate to 0% if stocks are held for over 5 years.

After graduating college, Palihapitiya followed his future wife, Brigette Lau, to California. They had three children together, and divorced in 2018.

Palihapitiya now lives in California with Nathalie Dompe, an Italian pharmaceutical heiress and model who he started dating in 2018, with whom he has one child.

In a December 2017 interview, Palihapitiya said that he keeps his children as far away from technology as possible, except for the occasional movie, explaining "I don’t like this co-dependency of ‘they need to rely on me, and when they can’t, I feed them a device because that becomes a babysitter’."

All content from Kiddle encyclopedia articles (including the article images and facts) can be freely used under Attribution-ShareAlike license, unless stated otherwise. Cite this article:
Chamath Palihapitiya Facts for Kids. Kiddle Encyclopedia.