Charles Dudley Rhodes (February 10, 1865 – January 24, 1948) was a United States Army Major General. He was a prominent commander of cavalry units from the Indian Wars through World War I, and was a lecturer and author.

The son of Major Dudley Woodbridge Rhodes and Marcia Parrish, Charles D. Rhodes was nicknamed "Teddy". He was born in Delaware, Ohio on February 10, 1865, and graduated from Columbian University (now George Washington University) in 1885. In 1889 he graduated from the United States Military Academy, receiving a commission as a Second Lieutenant of cavalry.

Rhodes served in the 6th Cavalry Regiment during the final US Army campaign against the Sioux.

Rhodes served with the 6th Cavalry Regiment in the Philippines during the Spanish–American War. He received the Distinguished Service Cross for heroism at Cavite on the island of Luzon.

Rhodes graduated from the Command and General Staff College in 1908.

In 1911, Rhodes was an umpire at the mounted exercise conducted by the Massachusetts Volunteer Militia.

Later in 1911, Rhodes and Paul Y. Malone took part in a confidential mission, traveling to Mexico disguised as journalists to assess the likelihood that Francisco I. Madero could remain in power if he won the presidency in the 1912 election.

During the 1912 Connecticut Maneuvers, Rhodes served as assistant chief of staff for the Red Division.

In 1913 Rhodes was assigned as adjutant of the Cavalry Camp of Instruction at Fort Riley, Kansas, and from 1914 to 1917 Rhodes served as commandant of Fort Riley's Mounted Service School.

From June to December, Rhodes commanded the 21st Cavalry Regiment, which was reorganized as the 79th Field Artillery Regiment. 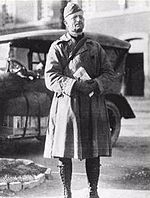 Rhodes as a Major General during World War I

During World War I, he commanded the 157th Artillery Brigade.

Rhodes later assumed command of the 42nd "Rainbow" Infantry Division, receiving temporary promotion to Major General. Within days of taking command of the 42nd Division in late 1918 Rhodes was injured in a plane crash, and turned the command over to Douglas MacArthur so he could recuperate.

Rhodes graduated from the Army War College in 1920.

His post-World War I assignments included commander of the 34th Infantry Division and Chief of Staff of US forces in the Philippines. He was promoted to permanent Brigadier General in 1925, and Major General in 1928.

Career as an author

Rhodes was a writer and lecturer. He authored several books and magazine articles, as well as historical works on cavalry in the Civil War. His works include: History of the Cavalry of the Army of the Potomac (1900); The Vicksburg Campaign (1908); Letters of a West Point Cadet: An Epic in Blank Verse of the Class of 1889, United States Military Academy (1935); Chief Joseph and the Nez Perces Campaign of 1877 (1937); and Diary Notes of a Soldier (1940). Beginning in the 1890s, Rhodes also authored numerous articles and short stories which were published in magazines.

Rhodes retired from the Army in 1929 and resided in Washington, D.C. He died at Walter Reed Hospital on January 24, 1948 and was buried with his wife Mary Counselman (1867–1943) at Arlington National Cemetery.

All content from Kiddle encyclopedia articles (including the article images and facts) can be freely used under Attribution-ShareAlike license, unless stated otherwise. Cite this article:
Charles Dudley Rhodes Facts for Kids. Kiddle Encyclopedia.