Kids Encyclopedia Facts
For others of a similar name, see Charles Baxter. 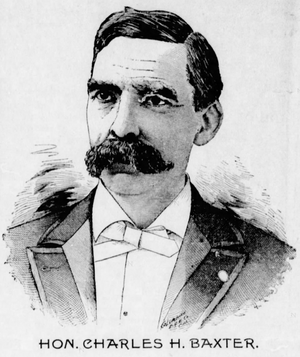 Portrait of Charles H. Baxter from an 1898 campaign advertisement.

Charles Henry Baxter (November 15, 1841 – ?) was a Captain in the Union Army during the American Civil War and served at the battles of Shiloh and Vicksburg, and later a member of the Wisconsin State Senate.

All content from Kiddle encyclopedia articles (including the article images and facts) can be freely used under Attribution-ShareAlike license, unless stated otherwise. Cite this article:
Charles H. Baxter Facts for Kids. Kiddle Encyclopedia.