She first published her works, including Jane Eyre, under the pseudonym (false name) of Currer Bell. In 1846, Charlotte encouraged her sisters to print Poems by Currer, Ellis, and Acton Bell. They did not sell well. Her first novel, The Professor, was rejected by many publishers. It was not printed until 1857. She is famous for her novel Jane Eyre (1847), which was very popular when it was printed.

Jane Eyre was a strong story of a plain, brave, clever woman struggling with her passions, reasons, and social condition. She later wrote the books Shirley (1849) and Villette (1853). She lived longer than her sisters, but she was only 38 when she died in pregnancy. 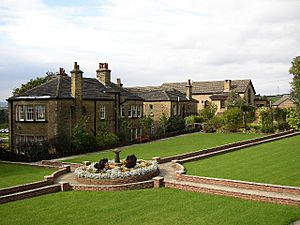 Charlotte Brontë was the third child of Patrick Brontë (formerly "Patrick Brunty"), an Irish Anglican clergyman, and his wife, Maria née Branwell. In April 1821, the family moved a few miles to Haworth. Patrick had been appointed Perpetual Curate there. Maria Branwell Brontë died of cancer on 15 September 1821. She left her five daughters and a son to be looked after by her sister Elizabeth Branwell.

In August 1824, Charlotte was sent with three of her sisters to the Clergy Daughters' School at Cowan Bridge in Lancashire. She described it as Lowood School in her novel Jane Eyre. The sisters were Emily, Maria and Elizabeth. The poor conditions of the school permanently affected Charlotte's health according to her. She thought it led to the early deaths of her two elder sisters, Maria (born 1814) and Elizabeth (born 1815). They died of tuberculosis in June 1825 soon after their father took them from the school on 1 June.

Charlotte went to school at Roe Head, Mirfield, from 1831 to 1832. There she met her lifelong friends, Ellen Nussey and Mary Taylor. In 1833 she wrote her novella The Green Dwarf under the name of Wellesley. Charlotte returned as a teacher from 1835 to 1838. In 1839 she became a governess to various families in Yorkshire, a career she had until 1841. 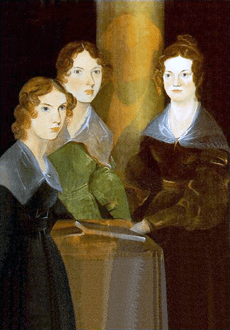 Branwell Brontë, Painting of the 3 Brontë Sisters, l to r Anne, Emily and Charlotte Brontë. Branwell painted himself out of this portrait of his three sisters.

In 1842 she and Emily travelled to Brussels to enroll in a pensionnat (boarding school) run by Constantin Heger (1809 – 1896) and his wife Claire Zoé Parent Heger (1814 – 1891). In return for this, Charlotte taught English and Emily taught music. Their time at the pensionnat was cut short when Elizabeth Branwell, their aunt, died in October 1842. Charlotte returned alone to Brussels in January 1843 to be a teacher at the pensionnat. This stay was not happy. She became lonely, homesick and deeply attached to Constantin Heger. She finally returned to Haworth in January 1844 and later used her time at the pensionnat as the inspiration for some of The Professor and Villette.

In May 1846 Charlotte, Emily and Anne self-financed the publication of a joint collection of poems under their assumed names Currer, Ellis and Acton Bell. The pseudonyms veiled the sisters' gender while preserving their initials; thus Charlotte was Currer Bell. "Bell" was the middle name of Haworth's curate, Arthur Bell Nicholls whom Charlotte later married, and "Currer" was the surname of Frances Mary Richardson Currer who had funded their school (and maybe their father). Of the decision to use noms de plume, Charlotte wrote:

Averse to personal publicity, we veiled our own names under those of Currer, Ellis and Acton Bell; the ambiguous choice being dictated by a sort of conscientious scruple at assuming Christian names positively masculine, while we did not like to declare ourselves women, because — without at that time suspecting that our mode of writing and thinking was not what is called "feminine" – we had a vague impression that authoresses are liable to be looked on with prejudice; we had noticed how critics sometimes use for their chastisement the weapon of personality, and for their reward, a flattery, which is not true praise.

Although only two copies of the collection of poems were sold, the sisters continued writing for publication and began their first novels, continuing to use their noms de plume when sending manuscripts to potential publishers.

The Professor and Jane Eyre 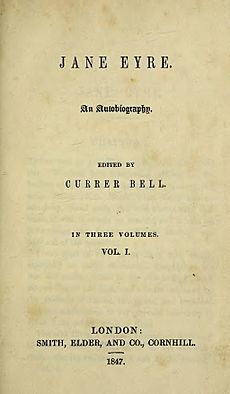 Title page of the first edition of Jane Eyre

Brontë's first manuscript, The Professor, did not secure a publisher, although she was heartened by an encouraging response from Smith, Elder & Co. of Cornhill, who expressed an interest in any longer works Currer Bell might wish to send. Brontë responded by finishing and sending a second manuscript in August 1847. Six weeks later Jane Eyre: An Autobiography was published. It tells the story of a plain governess, Jane, who, after difficulties in her early life, falls in love with her employer, Mr Rochester. They marry, but only after Rochester's insane first wife, of whom Jane initially has no knowledge, dies in a dramatic house fire. The book's style was innovative, combining naturalism with gothic melodrama, and broke new ground in being written from an intensely evoked first-person female perspective. Brontë believed art was most convincing when based on personal experience; in Jane Eyre she transformed the experience into a novel with universal appeal.

Jane Eyre had immediate commercial success and initially received favourable reviews. G. H. Lewes wrote that it was "an utterance from the depths of a struggling, suffering, much-enduring spirit", and declared that it consisted of "suspiria de profundis!" (sighs from the depths). Speculation about the identity and gender of the mysterious Currer Bell heightened with the publication of Wuthering Heights by Ellis Bell (Emily) and Agnes Grey by Acton Bell (Anne). Accompanying the speculation was a change in the critical reaction to Brontë's work, as accusations were made that the writing was "coarse", a judgement more readily made once it was suspected that Currer Bell was a woman. However, sales of Jane Eyre continued to be strong and may even have increased as a result of the novel developing a reputation as an "improper" book. A talented amateur artist, Brontë personally did the drawings for the second edition of Jane Eyre and in the summer of 1834 two of her paintings were shown at an exhibition by the Royal Northern Society for the Encouragement of the Fine Arts in Leeds.

Before the publication of Villette Brontë received a proposal of marriage from Arthur Bell Nicholls, her father's curate, who had long been in love with her. She initially turned down his proposal and her father objected to the union at least partly because of Nicholls's poor financial status. Elizabeth Gaskell, who believed that marriage provided "clear and defined duties" that were beneficial for a woman, encouraged Brontë to consider the positive aspects of such a union and tried to use her contacts to engineer an improvement in Nicholls's finances. Brontë meanwhile was increasingly attracted to Nicholls and by January 1854 she had accepted his proposal. They gained the approval of her father by April and married in June. Her father Patrick had intended to give Charlotte away, but at the last minute decided he could not, and Charlotte had to make her way to the church without him. The married couple took their honeymoon in Banagher, County Offaly, Ireland. By all accounts, her marriage was a success and Brontë found herself very happy in a way that was new to her. 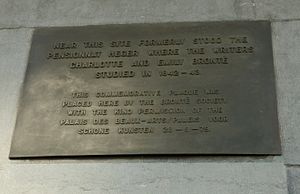 Brontë became pregnant soon after her wedding, but her health declined rapidly and, according to Gaskell, she was attacked by "sensations of perpetual nausea and ever-recurring faintness". She died, with her unborn child, on 31 March 1855, three weeks before her 39th birthday. Her death certificate gives the cause of death as tuberculosis, but biographers including Claire Harman suggest that she died from dehydration and malnourishment due to vomiting caused by severe morning sickness or hyperemesis gravidarum. There is also evidence that she died from typhus, which she may have caught from Tabitha Ackroyd, the Brontë household's oldest servant, who died shortly before her. Brontë was interred in the family vault in the Church of St Michael and All Angels at Haworth.

The Professor, the first novel Brontë had written, was published posthumously in 1857. The fragment of a new novel she had been writing in her last years has been twice completed by recent authors, the more famous version being Emma Brown: A Novel from the Unfinished Manuscript by Charlotte Brontë by Clare Boylan in 2003. Most of her writings about the imaginary country Angria have also been published since her death.

All content from Kiddle encyclopedia articles (including the article images and facts) can be freely used under Attribution-ShareAlike license, unless stated otherwise. Cite this article:
Charlotte Brontë Facts for Kids. Kiddle Encyclopedia.