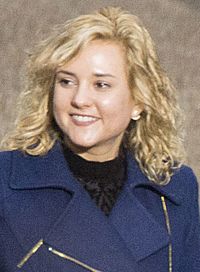 Charlotte Rose Pence Bond (born June 25, 1993) is an American writer. She is the second child and elder daughter of the 48th Vice President of the United States, Mike Pence, and Second Lady of the United States, Karen Pence. She has written for The DePaulia, Thought Catalog, Glamour and The Isis Magazine. She won a regional Emmy Award in 2014 for a movie she co-wrote and served as an associate producer on. She wrote the children's book Marlon Bundo's A Day in the Life of the Vice President, published in 2018.

All content from Kiddle encyclopedia articles (including the article images and facts) can be freely used under Attribution-ShareAlike license, unless stated otherwise. Cite this article:
Charlotte Pence Facts for Kids. Kiddle Encyclopedia.