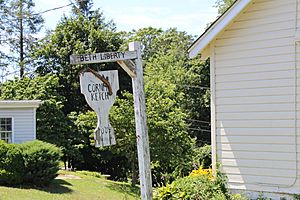 Chelsea is an unincorporated community in Bethel Township in Delaware County, Pennsylvania, United States. Chelsea is located at the intersection of Concord Road, Chelsea Road, Foulk Road, and Valley Brook Road in the northern part of the township.

The Chelsea blacksmith shop was the longest continually used blacksmith shop in Delaware County and was reputed to be one of the oldest in the County. A blacksmith had operated from that location since the time of the French and Indian War. The original building was demolished in February 2013 and the operations were moved to a larger facility on Foulk Road. The blacksmith shop is still run by the same owners since the early 1900s, the McKinleys.

All content from Kiddle encyclopedia articles (including the article images and facts) can be freely used under Attribution-ShareAlike license, unless stated otherwise. Cite this article:
Chelsea, Pennsylvania Facts for Kids. Kiddle Encyclopedia.