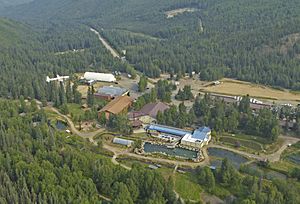 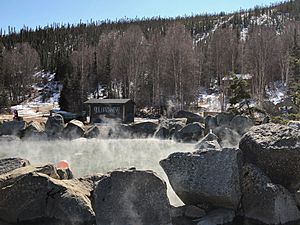 Chena Hot Springs is a hot spring, resort, and unincorporated community in the Fairbanks North Star Borough, Alaska, United States, 56.5 miles northeast of Fairbanks near the Chena River State Recreation Area. The resort makes use of the first low-temperature binary geothermal power plant built in Alaska, and is working on several alternative energy projects, including production and use of hydrogen and vegetable oil for fuel. The resort is conducting collaborative experiments in greenhouse production of vegetables with the University of Alaska Fairbanks Agricultural and Forestry Experiment Station. 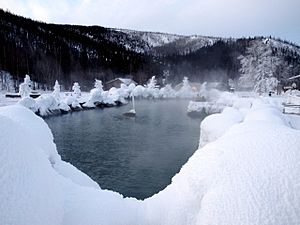 Chena Hot Springs was founded over 100 years ago by two gold mining brothers, Robert and Thomas Swan. In 1905, Robert Swan was suffering from rheumatism and needed a place to calm his pain and be comfortable. The two brothers set out to find the hot springs. It took them a little over a month to reach the hot springs after searching for it in Interior Alaska’s harsh landscape. In 1911, twelve small cabins were built to accommodate visitors. The twelve cabins developed, and they became one of the most famous resorts in the interior of Alaska. Chena Hot Springs became so famous that the United States Department of Agriculture sent chemists to analyze the water. The characteristics of the water are very different from other American hot springs.

Chena Hot Springs has visibility of the Aurora borealis, especially around the March equinox.

The purpose of the Ice Museum is to boost the tourism of the resort and showcase the artwork of resident ice artists Steve and Heather Brice. The museum is open throughout the entire year, including the summer, when the temperature can reach up to 90ºF(32ºC). The present museum is made of a steel framework with hollow walls and consists of a great hall and a lounge. Some of the ice sculptures include a gigantic ice tower and life-size jousting knights. One of the rooms even has a non-functioning ice toilet. Visitors are offered the opportunity to purchase a vodka "appletini" in a hand carved ice glass for an additional fee during the tour.

Chena Hot Springs Resort uses a geothermal energy plant to generate energy. The resort replaced the diesel generators used in the past with this powerplant since July 2006, and it is successful in reducing the cost from 30 cents/kWh to 7 cents/kWh. The resort owners have future plans in increasing the work output of the powerplant from 200kW to 1MW.

Chena Hot Springs has never formally reported a population on the U.S. Census. The USGS reported it had an estimated summer population of 10 for the resort.

All content from Kiddle encyclopedia articles (including the article images and facts) can be freely used under Attribution-ShareAlike license, unless stated otherwise. Cite this article:
Chena Hot Springs, Alaska Facts for Kids. Kiddle Encyclopedia.