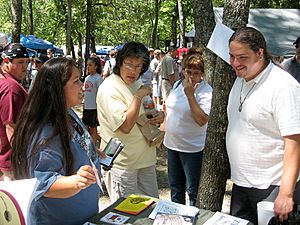 The Cherokee National Holiday is an annual event held each Labor Day weekend in Tahlequah, Oklahoma. The event celebrates the September 6, 1839 signing of the Constitution of the Cherokee Nation in Oklahoma after the Trail of Tears Indian removal ended.

Originally begun in 1953, the event has grown into one of the largest festivals in Oklahoma, attracting in excess of 70,000 attendees coming from all over the United States. Many attendees are also tribal members of the "Five Civilized Tribes" (the Cherokee, and also the Chickasaws, the Choctaws, Creeks, and Seminoles). Others who routinely attend the event are the Eastern Band of Cherokee Indians located in western North Carolina and also the United Keetowah Band which, like the Cherokee Nation, are headquartered in Tahlequah. 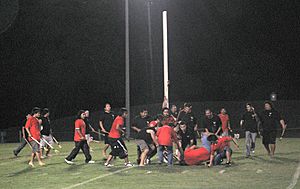 Each year a committee chooses a new theme for the annual celebration. Some recent themes have included:

Due to COVID-19 pandemic, the 68th Annual Cherokee National Holiday will be a "virtual holiday". Many events will still take place and spectators will be able to watch online to see the Chief's State of the Nation address, Cherokee art show, Miss Cherokee competition, as well as, demonstrations of traditional games. However, events such as the annual parade, fishing derby, powwow, softball tournament, arts and crafts, food markets and vendors are canceled and will resume next year.

All content from Kiddle encyclopedia articles (including the article images and facts) can be freely used under Attribution-ShareAlike license, unless stated otherwise. Cite this article:
Cherokee National Holiday Facts for Kids. Kiddle Encyclopedia.