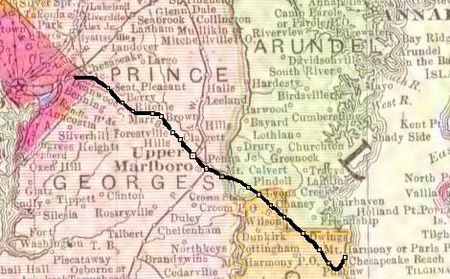 Chesapeake Beach is a town in Calvert County, Maryland. Its major attractions include a Railway Museum & Trail, the Chesapeake Beach Water Park, marinas, piers, charter boat fishing, and a Veterans Memorial Park. The population was 5,753 at the 2010 census.

The city has grown out from the intersection of Fishing Creek and the Chesapeake Bay. The creek has been dredged to allow pleasure craft, commercial fisherman and a few small US Navy vessels to dock in the city.

The southern end of the city remains heavily wooded and is distinguished by the large sandstone cliffs called the Randle Cliffs. These cliffs, and others along the Western Shore of the Chesapeake Bay, tower as high as 180 feet above the water and are constantly eroding due to freeze/thaw and wave action. The debris from these cliffs has formed a number of shallow sand bars which makes navigation by boat near the cliffs very difficult and the water very shallow for hundreds of yards into the Bay.

There were 2,134 households of which 43.1% had children under the age of 18 living with them, 51.4% were married couples living together, 15.2% had a female householder with no husband present, 4.6% had a male householder with no wife present, and 28.8% were non-families. 21.6% of all households were made up of individuals and 5.6% had someone living alone who was 65 years of age or older. The average household size was 2.70 and the average family size was 3.15.

Chesapeake Beach was established as a resort community at the end of the Chesapeake Beach Railway, a short line railroad from Washington, DC. It was the site of many slot machines in the early twentieth century (despite efforts to prohibit them) as part of the "Little Nevada" area of southern Maryland. Between steamer ships from Baltimore and trains from Washington, the weekend population of Chesapeake Beach reached into the 10,000s during the 1920s, until economic depression, and a bad hotel fire, brought an end to the railroad. The construction of the Bay Bridge to the Eastern Shore of Maryland in the 1950s enabled many of the visitors who used to spend their summers in Chesapeake Beach to now spend their time in Ocean City, Maryland instead.

Chesapeake Beach is also host to the United States Naval Research Laboratory Chesapeake Bay Detachment that experiments with various military radar systems and fire suppression technology. Perched atop the sandstone cliffs along the Western Shore of the Chesapeake Bay the lab is able to use their radars against a variety of surface and air targets in the Bay. Nearby Naval Air Station Patuxent River has several aircraft that assist in the Research lab's mission.

Hurricane Isabel struck Chesapeake Beach and the adjacent city of North Beach, Maryland in 2003. The storm surge pushed flood waters into both towns, damaging many homes beyond repair in North Beach, and knocking out electrical services for nearly one week.

All content from Kiddle encyclopedia articles (including the article images and facts) can be freely used under Attribution-ShareAlike license, unless stated otherwise. Cite this article:
Chesapeake Beach, Maryland Facts for Kids. Kiddle Encyclopedia.