The Chicago Air Shower Array (CASA) was a significant ultra high high-energy astrophysics experiment operating in the 1990's. It consisted of a very large array of scintillation detectors located at Dugway Proving Grounds in Utah, USA, approximately 80 kilometers southwest of Salt Lake City. The full CASA detector, consisting of 1089 detectors began operating in 1992 in conjunction with a second instrument, the Michigan Muon Array (MIA), under the name CASA-MIA. MIA was made of 2500 square meters of buried muon detectors. At the time of its operation, CASA-MIA was the most sensitive experiment built to date in the study of gamma ray and cosmic ray interactions at energies above 100 TeV (1014 electronvolts). Research topics on data from this experiment covered a wide variety of physics issues, including the search for gamma rays from Galactic sources (especially the Crab Nebula and the X-ray binaries Cygnus X-3 and Hercules X-1) and extragalactic sources (active Galactic nuclei and gamma-ray bursts), the study of diffuse gamma-ray emission (an isotropic component or from the Galactic plane), and measurements of the cosmic ray composition in the region from 100 to 100,000 TeV. For the topic of composition, CASA-MIA worked in conjunction with several other experiments at the same site: the Broad Laterial Non-imaging Cherenkov Array (BLANCA), the Dual Imaging Cherenkov Experiment (DICE) and the Fly's Eye HiRes prototype experiment. CASA-MIA operated continuously between 1992 and 1999. In summer 1999, it was decommissioned. 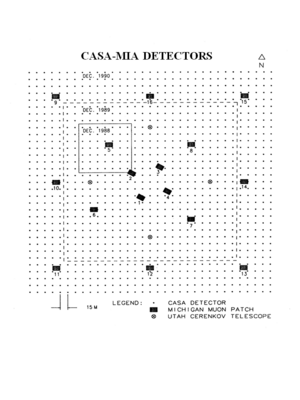 CASA was built to study the possibility of astrophysical sources of ultra high energy (UHE, E > 100 TeV) gamma-ray emission (see Science below). Gamma rays at these energies interact in the Earth's atmosphere to create an extensive air shower that propagates to the Earth's surface. At the surface, the shower consists predominantly of electrons/positrons, low-energy gamma rays, muons, and some hadrons, with a typical footprint on the ground of 50-100 m. (There is also a component of Cherenkov radiation reaching the ground that can be recorded by imaging atmospheric Cherenkov telescopes). An air shower array is a distributed set of particle detectors (scintillation detector, water Cherenkov detectors, etc.) spread out on the ground to record the passage of the shower particles. The primary particle direction is estimated from the relative arrival time of the shower hitting each detector; the primary particle energy is estimated from the number of particles recorded in each detector and from the lateral distribution of those measurements. 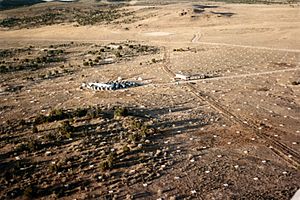 Aerial view of the Chicago Air Shower Array (CASA) and associated detectors at Duway Proving Grounds, Utah, USA. The CASA scintillation detectors are the white square boxes laid out on a 15 meter grid spacing. At the center of the array (left of center in this image) is the Fly's Eye II detector.

Prior to CASA, air shower arrays were typically modest in size, typically consisting of 50-100 detectors covering an area of around 50,000 square meters. The plan for CASA was to build a much more sensitive experiment that would be much larger in size, use state-of-the-art electronics, and be coupled with a large array of muon detectors (MIA). The expectation was that showers initiated by gamma rays would contain far fewer muons compared to showers initiated by cosmic rays. The original plan was for an array of 1064 detectors, but the number was subsequently increased to 1089.

Some of the key design features CASA-MIA were the following:

The trigger and data-acquisition sequence for CASA was complex because of the distributed electronics; it worked as follows:

CASA, and its associated muon array MIA, achieved excellent performance and was the state-of-the-art in air shower experiments in the ultra high energy band for a considerable period of time after its operational period in the 1990's. Only in the late 2010's have experiments such as the Tibet Air Shower Array and the High Altitude Water Cherenkov Experiment surpassed CASA-MIA in sensitivity at energies above 100 TeV. The median gamma-ray energy for a source passing near zenith was 115 TeV. The gamma-ray angular resolution varied with the size (number of particles) in the detected shower and was approximately 0.7 degrees for showers with the median number of particles, improving to 0.25 degrees at higher energies. The muon array provided important capability to reject background cosmic ray events; at the median energy of 115 TeV, the fraction of cosmic ray events passing the muon selection criteria for gamma rays was 0.06 (i.e. approximately 17 cosmic ray events were rejected for each one accepted). At higher energies, the background rejection power was significantly increased; for example, at a median energy of 5,000 TeV, the fraction of cosmic rays passing muon selection criteria was reduced to approximately 0.0001.

The scientific motivation for CASA came from intriguing results from several experiments in the 1980's. These experiments reported excess air shower events from the direction of two well-known Galactic X-ray binary sources: Cygnus X-3 and Hercules X-1. In 1983, the Kiel and Haverah Park experiments reported an excess of events from the direction of Cygnus X-3, where the arrival times of the events appeared to be modulated by the 4.8-hour orbital periodicity of the binary source. The statistical significance of each signal was weak (around four standard deviations above background), but the results implied that Cygnus X-3 was a luminous emitter of ultra high energy gamma rays and that, in order to do so, it must be a very efficient accelerator of high energy cosmic rays and hence it could provide a large fraction of the pervading flux of cosmic ray particles in our Galaxy.

After these results, a number of groups around the world began designing, or improving, air shower arrays to make follow-up studies. One of these groups was from the University of Chicago,led by James Cronin. Cronin's idea was to build a definitive experiment that could easily verify, or refute, the results on Cygnus X-3. The experiment would be much larger (and much more sensitive) than the Kiel or Haverah Park experiments and it would use a large array of muon detectors to reject the background of hadronic cosmic ray events (i.e. protons and nuclei). (Showers initiated by gamma-ray primaries are expected to have far fewer muons than those initiated by cosmic ray primaries). Cronin assembled a team of scientists (discussed in Collaboration) to develop and construct CASA. The University of Chicago group was partnered with groups from the University of Michigan and the University of Utah, who had already constructed a muon array and smaller air shower array, and the site for CASA would be on Dugway Proving Grounds.

The construction and deployment of CASA took place between 1988-1991. Construction activities were carried out at the University of Chicago in the Accelerator Building of the Enrico Fermi Institute. The completed scintillation detectors, along with electronics, were shipped to Utah in large semi-trailers, where they were installed by students, postdocs and faculty. An initial array of 49 detectors became operational in 1989, followed by a 529-detector array in 1990. Standard science operation of the full 1089-detector CASA array (along with the 1024-counter muon array) started in December 1991. CASA operated very successfully, largely without interruption, until 1997. During that time a total of approximately 3 billion air showers events were recorded. Partial operations continued for several more years, in conjunction with the BLANCA and DICE experiments. The various experiments at the site, including CASA, ceased operation in 1999.

The CASA project was conceived by James W. Cronin and the design and construction were carried out by a team of scientists, engineers and technicians in the Enrico Fermi Institute of the University of Chicago (see for more details). The initial core group of scientists consisted of Cronin, postdoctoral fellows Kenneth Gibbs, Brian Newport, Rene Ong, and Leslie Rosenberg, and graduate students Nicholas Mascarenhas, Hans Krimm and Timothy McKay. During the operational phase of CASA, the Chicago group included postdoctoral fellows Mark Chantell, Corbin Covault, Brian Fick and Lucy Fortson, and graduate students Alexander Borione, Joseph Fowler and Scott Oser. The Michigan Muon Array was constructed by a team of researchers from the University of Michigan, including James Matthews, David Nitz, Daniel Sinclair, and John van der Velde.

All content from Kiddle encyclopedia articles (including the article images and facts) can be freely used under Attribution-ShareAlike license, unless stated otherwise. Cite this article:
Chicago Air Shower Array Facts for Kids. Kiddle Encyclopedia.