Chimney Bluffs State Park is a 597-acre (2.42 km2) state park in the town of Huron in Wayne County, New York. The park is situated on the southern shore of Lake Ontario, east of Sodus Bay. From the park's hiking trails, visitors can view the large clay formations at the water's edge for which the park is named.

A portion of the Chimney Bluffs in 2014

The bluffs are formed from eroded drumlins, teardrop-shaped hills of glacial till that were deposited and shaped by glaciers during the most recent ice age. The erosive power of wind, rain, snow, and waves has formed the landscape into sharp pinnacles. Although the pinnacles and cliffs, some of which rise up to 150 feet (46 m) above the lake shore, have existed for thousands of years, they are constantly changing and further eroding.

A 1907 postcard of Chimney Bluffs

The Chimney Bluffs area has been a landmark for many years. According to the pamphlet given by the park, smugglers used the area as a landing point while transporting liquor from Canada during Prohibition. The area was acquired by the state of New York in 1963 after having previously been operated informally as a privately owned recreation area.

It lay undeveloped until 1999 when a parking lot, service building with heated restrooms, picnic areas with grills, and hiking trails throughout the park were added. It is considered a year-round park for hiking and picnicking in the summer. Swimming is prohibited. Winter activities include cross-country skiing and snowshoeing; a trailhead for snowmobiling is also located within the park. 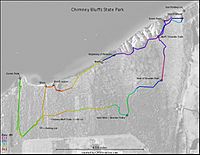 The park has approximately four miles (6.4 km) of hiking trails, including a one-mile (1.6 km) trail along the Bluffs between the west and east entrances.

From some vantage points in the park, visitors can see Nine Mile Point Nuclear Generating Station, 25 miles (40 km) to the northeast, as well as the coal smokestacks located in Oswego.

All content from Kiddle encyclopedia articles (including the article images and facts) can be freely used under Attribution-ShareAlike license, unless stated otherwise. Cite this article:
Chimney Bluffs State Park Facts for Kids. Kiddle Encyclopedia.