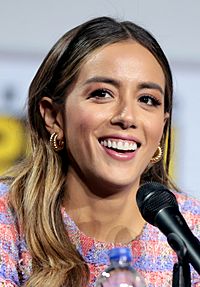 Chloe Wang (Chinese: 汪可盈; pinyin: Wāng Kěyíng; born April 18, 1992), known professionally as Chloe Bennet, is an American actress and singer. She is known for her role as Daisy Johnson on the television series Marvel's Agents of S.H.I.E.L.D. (2013–2020). She was born in Chicago.

All content from Kiddle encyclopedia articles (including the article images and facts) can be freely used under Attribution-ShareAlike license, unless stated otherwise. Cite this article:
Chloe Bennet Facts for Kids. Kiddle Encyclopedia.