A United States Post Office operated here as Council House, Indian Territory from February 6, 1872 to June 30, 1880. Postal operations were later carried on at nearby Lyceum, site of the Choctaw girls’ academy, and Tuskahoma. During the days of the Indian Territory the Council House was located in Wade County, Choctaw Nation. After several decades of constitutional experimentation, during which the Choctaw Indians moved their national capital among several locations, the National Council in 1883 authorized construction of a permanent seat of government at Tushka Homma. The name means “home of the red warrior” in the Choctaw language, and its spelling has since been standardized as Tuskahoma.

The Capitol was completed in September 1884, built of red native brick, sandstone, and nearby timber for $30,000. It is 72'-11" long by 62'-4" feet wide, and stands 54'-2" tall to the chimneys. It consists of two stories and a mansard roof attic. In the fall of 1884 the Indian Journal at Muskogee, Indian Territory wrote, “The capitol building is the finest structure in the Territory…” 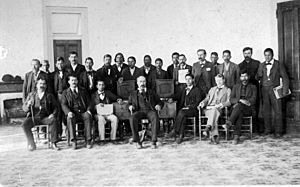 Inside the Capitol were rooms for the Senate, House of Representatives, Principal Chief, Supreme Court, and constitutional officers, including the National Attorney and National Auditor.

The Capitol was in use from 1884 until 1907, when the Choctaw Nation was abolished and Oklahoma became a state. After statehood the building fell into disuse and disrepair.

The Capitol has achieved new life as the national museum of the successfully reconstituted Choctaw Nation, whose executive offices are now located in Durant, Oklahoma. The Choctaw Nation holds its annual Labor Day festival there, which attracts nationally known country-western singers and bands, and draws in excess of 100,000 attendees.

A Choctaw war veterans' memorial is on the Capitol grounds. It includes a special section in tribute to the famous Choctaw Code Talkers, who pioneered the use of Native American languages as military code. Their initial exploits were during World War I, and were repeated by Choctaws and additional tribes during World War II.

The Capitol is listed on the National Register of Historic Places. More information on the Capitol, Tuskahoma and the Choctaw Nation may be found in the Pushmataha County Historical Society.

All content from Kiddle encyclopedia articles (including the article images and facts) can be freely used under Attribution-ShareAlike license, unless stated otherwise. Cite this article:
Choctaw Capitol Building Facts for Kids. Kiddle Encyclopedia.