Choctaw NWR was established in 1964 on lands acquired by the Corps of Engineers in conjunction with the Coffeeville Lock and Dam project. 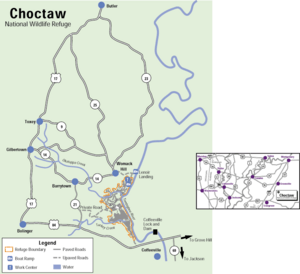 The refuge borders the Tombigbee River (and the Tennessee-Tombigbee Waterway) for 6.5 miles (10.5 km). Okatuppa and Turkey Creeks divide the refuge into three unites. The river and the creeks make a large portion of the refuge accessible only by boat. The entire refuge is subject to annual Spring flooding.

Four hundred nest boxes are maintained for wood ducks resulting in the hatching of approximately 2500 birds each year. Wintering waterfowl numbers can exceed 10,000. In addition to the moist soil, crops such as millet, milo, wheat, and clover are grown in fields for the benefit of both waterfowl and resident wildlife.

In addition, numerous neotropical migrant and wading birds benefit from management activities. Following a successful bald eagle program in the early 1990s the refuge hosts a nesting pair of eagles each winter. In the summer, wood storks can be found resting and feeding in the back-water sloughs and moist soil units. Other wildlife include white-tailed deer, gray squirrels, turkey, raccoons, opossum, alligator, and beaver.

Fishing is popular with bass, white perch, catfish, and bream in abundance throughout the creeks and rivers. Second in popularity is hunting. White-tailed deer and feral hogs may be hunted as well as squirrel, rabbit, and raccoon.

All content from Kiddle encyclopedia articles (including the article images and facts) can be freely used under Attribution-ShareAlike license, unless stated otherwise. Cite this article:
Choctaw National Wildlife Refuge Facts for Kids. Kiddle Encyclopedia.