As Christians, ChristChurch has a large focus on sharing their faith with non-Christians by building community through holding a large number of social events throughout the year, which allow people to invite friends into the church community. These include football, curry nights, picnics, live music nights and other outings.

ChristChurch is a multicultural community with attendees from all over the world.

ChristChurch London was founded in October 2004 by David Stroud, who moved from Birmingham to start the church, and recruited Adrian Holloway and Rhys Scott to be part of the church-planting team. The church officially launched in 2005 at the New Connaught Rooms in Covent Garden and has since relocated a number of times as the church has grown. They now meet in four separate locations. 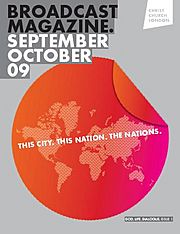 The service often begins with about half and hour of worship using largely contemporary Christian music, including songs by artists such as Chris Tomlin and Hillsong, together with original songs written by members of the ChristChurch London Worship Team. This is then followed by approximately half and hour of preaching by a church elder or guest speaker, with a sermon centred on a passage of Biblical scripture. At the end of the service, people are often given the opportunity to be prayed for and to stay for refreshments, or after church socials.

ChristChurch holds a number of special Sunday meetings throughout the year, including three baptismal services, two dedication services, two services celebrating London, and a Christmas Carol Service. They also have around six guest speakers each year.

When church attendance continued to grow, ChristChurch announced it would stop the afternoon service at Blackfriars from January 2016 and move from its existing two services to four, each in separate locations. Those services are currently running in Stockwell, Blackfriars, Covent Garden and Bethnal Green

ChristChurch London has around 20 Connect Groups with more being added regularly. They are groups where people can build community and use their skills and passions to contribute to the flourishing of London life. These groups gather around a common cause; a people, a place, or a passion. Some examples include groups for those in the workplace, groups for Students, a group for those involved in social justice, and a group for East End Creatives.

ChristChurch hosts free Alphas twice a year for non-Christians and Christians. They are run throughout the week across London for eight consecutive weeks. Since 2004, over 2000 people in total have attended Alpha at ChristChurch.

ChristChurch London hosts two or three launches per Alpha course, which are also held at Sway Bar in Covent Garden.

7 October 2009: Alister McGrath, author of the The Dawkins Delusion?.

Due to its location in the centre of London, ChristChurch attracts many students from the nearby universities, mainly from colleges of the University of London.

All content from Kiddle encyclopedia articles (including the article images and facts) can be freely used under Attribution-ShareAlike license, unless stated otherwise. Cite this article:
ChristChurch London Facts for Kids. Kiddle Encyclopedia.