Christ Church in Armley, Leeds, West Yorkshire, England is an active Anglican parish church in the archdeaconry of Leeds and the Diocese of Leeds. The church is one of two Church of England churches in Armley; the other being the larger St. Batholomew's Church. It is a Grade II listed building.

A number of parishoners had been seriously questioning the future of the church, but it was the present vicar who put forward the ideas which were eventually acted upon. To cut the high costs of heating, the ceiling was lowered and the nave was divided so that 250 to 350 seats can still be used.

The church broke ground in 1869 before being completed in 1872, having been built to a design by architect Richard L. Adams. The church was listed in 1976 and modernised internally in 1984. In 1986 the church was included in the BBC's Domesday Project having its particulars recorded for posterity. The question of the future viability of the church was recorded in the project.

The church is located in Upper Armley on the junctions of Theaker Lane, Moorfield Road and Armley Ridge Road. It is the closest of the Anglican churches to the centre of Armley. 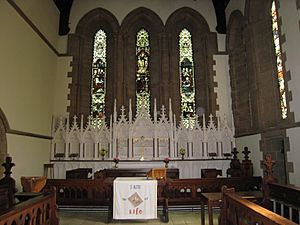 All content from Kiddle encyclopedia articles (including the article images and facts) can be freely used under Attribution-ShareAlike license, unless stated otherwise. Cite this article:
Christ Church, Armley Facts for Kids. Kiddle Encyclopedia.