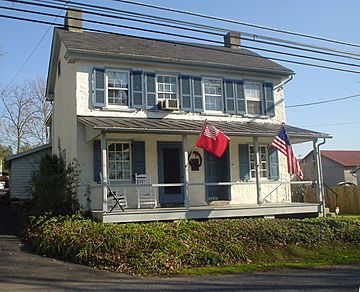 The museum contains part of the bandage put on Abraham Lincoln after he was assassinated. The museum also houses the pocket book Jennie Wade was carrying when she was killed at the battle of Gettysburg, and a number of autographs including those of Sitting Bull, Shirley Temple, Helen Keller and Basil Rathbone. The Sanderson's archives contain close to 80 letters to Sanderson from Civil War veterans.

As Mr. Sanderson was a great friend of the Wyeth family, the museum has a number of works from N.C., Andrew and Jamie on display.

In April, 2007 the board observed the museum's 40th anniversary with the dedication of a bronze plaque to the five founding members. Andrew Wyeth and Thomas Thompson, the two surviving founders, were present for the ceremony.

A banquet was held on October 14, 2007 to celebrate the museum's 40th Anniversary. In September 2008 the museum was filmed as part of a British documentary on U.S. Route 1.

All content from Kiddle encyclopedia articles (including the article images and facts) can be freely used under Attribution-ShareAlike license, unless stated otherwise. Cite this article:
Christian C. Sanderson Museum Facts for Kids. Kiddle Encyclopedia.