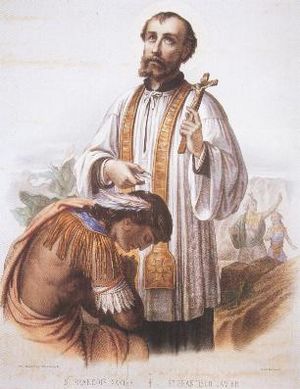 Reformatting native religious and cultural activities and beliefs into a Christianized form was officially sanctioned; preserved in the Venerable Bede's Historia ecclesiastica gentis Anglorum is a letter from Pope Gregory I to Mellitus, arguing that conversions were easier if people were allowed to retain the outward forms of their traditions, while claiming that the traditions were in honor of the Christian God, "to the end that, whilst some gratifications are outwardly permitted them, they may the more easily consent to the inward consolations of the grace of God". In essence, it was intended that the traditions and practices still existed, but that the reasoning behind them was altered.

All content from Kiddle encyclopedia articles (including the article images and facts) can be freely used under Attribution-ShareAlike license, unless stated otherwise. Cite this article:
Christianization Facts for Kids. Kiddle Encyclopedia.