The Christmas goshawk (Accipiter fasciatus natalis) or Christmas Island goshawk, is a bird of prey in the goshawk and sparrowhawk family Accipitridae. It is a threatened endemic of Christmas Island, an Australian territory in the eastern Indian Ocean. 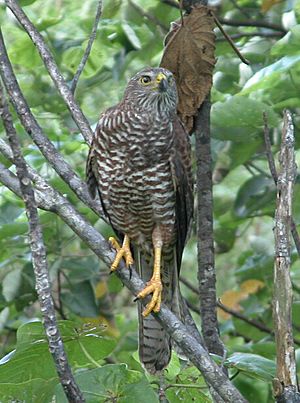 The Christmas goshawk is smaller and has more rounded wings than the nominate subspecies. Colouration is broadly similar, differing in that the hindneck, cap and ear coverts are dark grey, lacking a brown tinge. Females are distinctly larger than males.

The goshawk is restricted to the 135 km2 Christmas Island where it is found in the tropical rainforest that covers 75% of the island, as well as in other habitats there such as regrowth forest and the edges of clearings.

The goshawk feeds on a wide range of vertebrates and invertebrates, including birds, mammals, reptiles and insects. It takes its prey from the ground or in flight. It will hunt from a perch or chase birds through the forest.

The goshawk is listed as endangered under the Environment Protection and Biodiversity Conservation Act 1999. There are no detailed population statistics for the goshawks, though the population is small and it has been estimated that there are no more than 100 mature birds, or 50 breeding pairs, on the island. The principal threat comes from yellow crazy ants which were accidentally introduced to the island. The threat is not only that of ant predation of goshawk nestlings, but also indirectly from potentially massive changes to the ecology of the island caused by the ants.

All content from Kiddle encyclopedia articles (including the article images and facts) can be freely used under Attribution-ShareAlike license, unless stated otherwise. Cite this article:
Christmas goshawk Facts for Kids. Kiddle Encyclopedia.