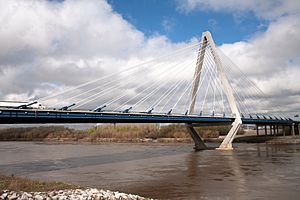 The Christopher S. Bond Bridge in Kansas City, Missouri (often referred to as the New Paseo Bridge) is a cable-stayed bridge across the Missouri River. It carries I-29/I-35/US 71. The bridge opened to limited traffic on September 27, 2010 and all lanes opened on December 18, 2010. The Bond bridge is a replacement for the Paseo Bridge.

The bridge is named for Christopher "Kit" Bond, the former Missouri Governor and United States Senator.

On November 14, 2007, MoDOT announced plans for a complete replacement of the Paseo Bridge. The new Christopher S. Bond Missouri River Bridge is a dual-span cable-stayed bridge, anchored by a 260-foot (79 m) tall delta-shaped pylon. The pylon rises 316 feet (96 m) above the Missouri River. The new bridge increased the roadway capacity from two lanes each direction to three lanes southbound on the bridge and 4 lanes northbound on the bridge, one northbound lane being an auxiliary lane. The bridge is designed to have four through lanes each way at a future date without needing to widen the bridge. 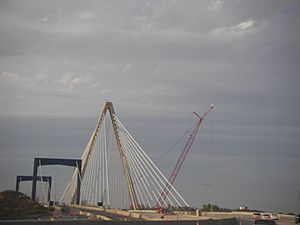 Bridge from roadway shortly after opening. Note old bridge to the left.

In December 2007, the Federal Aviation Administration warned that the pylon might interfere with traffic at Kansas City Downtown Airport, a mile to the west. In August 2008, the FAA altered flight procedures at the airport to give planes more than 700 feet (210 m) of clearance above the pylon. Construction on the Bond bridge began in April 2008, just downstream of the Paseo bridge. This allowed the Paseo bridge to remain open to traffic during construction. With the opening of the Bond bridge, demolition of the Paseo bridge started, and was completed on July 1, 2011.

The bridge is part of a $245 million project that upgraded an approximately 2-mile (3.2 km) section of the I-29/I-35 corridor to six lanes. The contractor is Paseo Corridor Constructors (PCC), a joint venture team composed of Clarkson Construction Company, Massman Construction Co., and Kiewit Construction Co. PCC provides public information and updates at kcICON. The bridge was designed by Bradley Touchstone of the DodStone Group of Tallahassee, Florida. The firm also designed the John James Audubon Bridge in Louisiana, which is the longest cable-stayed bridge in North America.