Church of St John the Baptist, Niton facts for kids 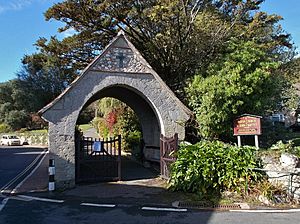 Entrance to the church

The Church of St John the Baptist, Niton is a Church of England parish church in Niton, Isle of Wight.

The church was founded by William FitzOsbern and given to an abbey in Normandy. In the Victorian era it was extensively restored and rebuilt.

On the wall can be found a memorial portrait by John Flaxman, showing a woman holding pelicans in her hand in relief. The chancel has a modern reredos.

The registers, which date from 1560, include the following entry:

July the 1st, Anno Domini 1675. Charles II, king of Great Britain, France, and Ireland, etc., came safely ashore at Puckaster, after he had endured a great and dangerous storm at sea.."

In front of the porch is a 19th-century Celtic cross by Joseph Clarke on the four steps of the old churchyard cross.

Near the Celtic cross a marble monument marks the grave of Edward Edwards, (1812–1886) the pioneer of the public library movement. The churchyard also contains four Commonwealth war graves of service personnel, three from World War I and one from World War II.

All content from Kiddle encyclopedia articles (including the article images and facts) can be freely used under Attribution-ShareAlike license, unless stated otherwise. Cite this article:
Church of St John the Baptist, Niton Facts for Kids. Kiddle Encyclopedia.