Church of St Mary and All Saints, Fotheringhay facts for kids

The Church of St Mary and All Saints, Fotheringhay is a parish church in the Church of England in Fotheringhay, Northamptonshire. It is noted for containing a mausoleum to leading members of the Yorkist dynasty of the Wars of the Roses. 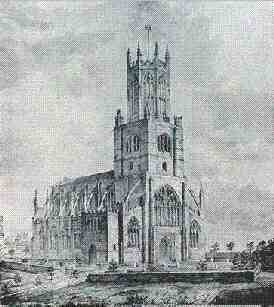 The work on the present church was begun by Edward III who also built a college as a cloister on the church's southern side. After completion in around 1430, a parish church of similar style was added to the western end of the collegiate church with work beginning in 1434. A local mason, William Horwood was contracted to build the nave, porch, and tower of this church for £300 for the Duke of York. It is the parish church which still remains.

The large present church is named in honour of St Mary and All Saints, and has a distinctive tall tower dominating the local skyline. The church is Perpendicular in style and although only the nave, aisles and octagonal tower remain of the original building it is still in the best style of its period.

The church has been described by Simon Jenkins as

float[ing] on its hill above the River Nene, a galleon of Perpendicular on a sea of corn.

The college continued to 1547, when it was seized by the Crown, along with all remaining chantries and colleges. The chancel was pulled down immediately after the college was granted to John Dudley, 1st Duke of Northumberland, by King Edward VI. A grammar school was founded in its place which lasted until 1859. 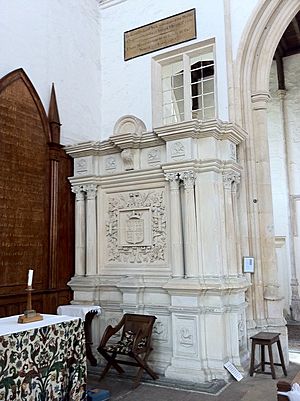 Memorial to Edward of Norwich, 2nd Duke of York

Nearby Fotheringhay Castle was the principal home of two Dukes of York. Edward of Norwich, 2nd Duke of York, who was killed at the Battle of Agincourt in 1415 was buried in the church. He had earlier established a college for a master and twelve chaplains at the location. Edward's burial provided the basis for the later adoption of the church as a mausoleum to the Yorkist dynasty. In 1476 the church witnessed one of the most elaborate ceremonies of Edward IV's reign – the re-interment of the bodies of the king's father Richard Plantagenet, 3rd Duke of York and his younger brother Edmund, Earl of Rutland, who had been buried in a humble tomb at Pontefract. Father and son fell at the Battle of Wakefield on 30 December 1460.

Thomas Whiting, Chester Herald, has left a detailed account of the events:

on 24 July [1476] the bodies were exhumed, that of the Duke, "garbed in an ermine furred mantle and cap of maintenance, covered with a cloth of gold" lay in state under a hearse blazing with candles, guarded by an angel of silver, bearing a crown of gold as a reminder that by right the Duke had been a king. On its journey, Richard, Duke of Gloucester, with other lords and officers of arms, all dressed in mourning, followed the funeral chariot, drawn by six horses, with trappings of black, charged with the arms of France and England and preceded by a knight bearing the banner of the ducal arms. Fotheringhay was reached on 29 July, where members of the college and other ecclesiastics went forth to meet the cortege. At the entrance to the churchyard, King Edward waited, together with the Duke of Clarence, the Marquis of Dorset, Earl Rivers, Lord Hastings and other noblemen. Upon its arrival the King 'made obeisance to the body right humbly and put his hand on the body and kissed it, crying all the time.' The procession moved into the church where two hearses were waiting, one in the choir for the body of the Duke and one in the Lady Chapel for that of the Earl of Rutland, and after the King had retired to his 'closet' and the princes and officers of arms had stationed themselves around the hearses, masses were sung and the King's chamberlain offered for him seven pieces of cloth of gold 'which were laid in a cross on the body.' The next day three masses were sung, the Bishop of Lincoln preached a 'very noble sermon' and offerings were made by the Duke of Gloucester and other lords, of 'The Duke of York's coat of arms, of his shield, his sword, his helmet and his coursers on which rode Lord Ferrers in full armour, holding in his hand an axe reversed.' When the funeral was over, the people were admitted into the church and it is said that before the coffins were placed in the vault which had been built under the chancel, five thousand persons came to receive the alms, while four times that number partook of the dinner, served partly in the castle and partly in the King's tents and pavilions. The menu included capons, cygnets, herons, rabbits and so many good things that the bills for it amounted to more than three hundred pounds.

In 1495 the body of Cecily Neville, Duchess of York was laid to rest beside that of her husband the Duke of York, as her will directed. She bequeathed to the College

After the choir of the church was destroyed in the Reformation during the sixteenth century, Elizabeth I ordered the removal of the smashed York tombs and created the present monuments to the third Duke and his wife around the altar.

The birthday of Richard III is commemorated annually by the Richard III Society by the placing of white roses in the church. 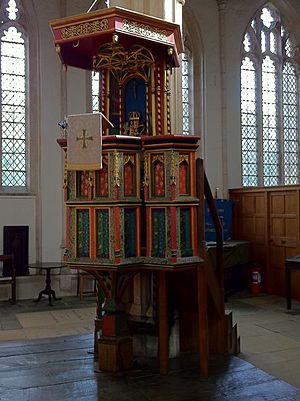 Pulpit given by Edward IV

The church contains a notable 15th-century painted pulpit donated by Edward IV carrying the royal arms, flanked by a bull for George of Clarence and a silver boar for Richard of Gloucester. 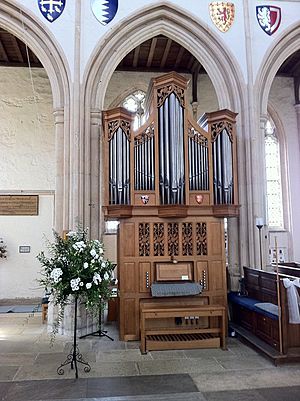 The current 2 manual pipe organ is by Vincent Woodstock and dates from around 2000. A specification of the organ can be found on the British Institute of Organ Studies National Pipe Organ Register at D08348.

All content from Kiddle encyclopedia articles (including the article images and facts) can be freely used under Attribution-ShareAlike license, unless stated otherwise. Cite this article:
Church of St Mary and All Saints, Fotheringhay Facts for Kids. Kiddle Encyclopedia.