Cicely Mary Barker (28 June 1895 – 16 February 1973) was an English illustrator best known for a series of fantasy illustrations depicting fairies and flowers. Barker's art education began in girlhood with correspondence courses and instruction at the Croydon School of Art. Her earliest professional work included greeting cards and juvenile magazine illustrations, and her first book, Flower Fairies of the Spring, was published in 1923. Similar books were published in the following decades.

Barker was a devout Anglican, and donated her artworks to Christian fundraisers and missionary organizations. She produced a few Christian-themed books such as The Children’s Book of Hymns and, in collaboration with her sister Dorothy, He Leadeth Me. She designed a stained glass window for St. Edmund's Church, Pitlake, and her painting of the Christ Child, The Darling of the World Has Come, was purchased by Queen Mary.

Barker was equally proficient in watercolour, pen and ink, oils, and pastels. Kate Greenaway and the Pre-Raphaelites were the principal influences on her work. She claimed to paint instinctively and rejected artistic theories. Barker died in 1973. Though she published Flower Fairy books with spring, summer, and autumn themes, it wasn't until 1985 that a winter collection was assembled from her remaining work and published posthumously.

Barker was born the second daughter and youngest child of Walter Barker, a partner in a seed supply company and an amateur artist, and his wife Mary Eleanor (Oswald) Barker on 28 June 1895 at home at 66 Waddon Road in Croydon, Surrey, England. Barker was an epileptic as a child, and cared for at home by her parents. Later, her sister and elder by two years, Dorothy Oswald Barker, continued the care. Her middle class family of four was moderately prosperous. A nanny, a governess, and a cook to prepare special meals for Barker were hired. She spent much time in bed at home amusing herself with painting books and a nursery library that included the works of Kate Greenaway and Randolph Caldecott – two artists who exerted strong influences on her later art.

Barker took correspondence courses in art, probably until about 1919. In 1908 at 13 years, she entered an evening class at the Croydon School of Art, and attended the school into the 1940s. In time, she received a teaching position.

In 1911, Raphael Tuck & Sons bought four of Barker's "little drawings" for half a sovereign, and published them as postcards. In October 1911, she won second prize in the Croydon Art Society's poster competition, and shortly afterward was elected the youngest member of the Society. The art critic for the Croydon Advertiser remarked, "Her drawings show a remarkable freedom of spirit. She has distinct promise."

Following her father's death in June 1912, the seventeen-year-old Barker submitted art and poetry to My Magazine, Child’s Own, Leading Strings, and Raphael Tuck annuals in an effort to support both her mother and sister. Her sister Dorothy taught kindergarten in two private schools before opening a kindergarten at home. She brought in some money for the family's support while supervising the household.

Flower Fairies of the Spring, 1923

Fairies became a popular theme in art and literature in the early 20th century following the releases of The Coming of the Fairies by Sir Arthur Conan Doyle, Peter Pan by J. M. Barrie, and the fairy-themed work of Australian Ida Rentoul Outhwaite. Queen Mary made such themes even more popular by sending Outhwaite postcards to friends during the 1920s. In 1918, Barker produced a postcard series depicting elves and fairies.

In 1923, Barker sent her flower fairy paintings to various publishers. Blackie paid £25 for 24 paintings with accompanying verses, but it wasn't until publication of Flower Fairies of the Summer in 1925 that Barker received royalties for her work. Mary Violet Clayton Calthrop, wife of author Dion Clayton Calthrop, wrote in April 1925 about Barker and Flower Fairies of the Spring: "She has such exquisite taste, besides draughtsmanship."

In 1924, the family moved into a four-level, semi-detached Victorian house at 23 The Waldrons. Barker had a studio built in the garden and her sister conducted a kindergarten in a room at the back of the house. The family lived frugally and attended both St. Edmund's and St. Andrew's in Croydon – "low" churches for the less privileged. Barker sometimes incorporated portraits of her fellow parishioners in her religious works. She was described by Canon Ingram Hill as "one of the pillars" of St. Andrew's.

The children in the kindergarten modelled for the Flower Fairies until the kindergarten closed in 1940. In an interview in 1958, Barker said, "My sister ran a kindergarten and I used to borrow her students for models. For many years I had an atmosphere of children about me – I never forgot it." She also painted the children of relatives as well as Gladys Tidy, the Barkers' young housekeeper, who posed for the Primrose Fairy in 1923. The plants were painted from life, and if a specimen was not readily at hand, Kew Gardens staff would provide her the specimens needed. Barker designed and built the Flower Fairy costumes, and based each on the flowers and leaves of the particular plant to be illustrated. The costumes were kept in a trunk in her studio along with wings made of twigs and gauze. Each was broken down after an illustration was completed and the parts recycled for other costumes. She often referred to Dion Clayton Calthrop's English Costume.

In the late 1920s, Barker began to doubt she was doing enough for the church and considered focusing solely on sacred works. Family and friends recommended she continue secular and sacred works, which she did.

Barker continued to attend evening classes at the Croydon Art School between the 1920s and the 1940s, eventually receiving a teaching position. She took sketching trips to Amberley and Storrington in Sussex and to Cornwall and the southern coast with family and friends. She visited and stayed with artist Margaret Tarrant in Gomshall, Surrey and with family in Ugglebarnby, Near Whitby, North Yorkshire.

In 1940, the Barkers' live-in maid retired, and Dorothy Barker closed her school at the back of the house in The Waldrons. She continued to supervise the household, and to give both her mother and sister the care they needed. Dorothy and her sister collaborated upon only two books: Our Darling's First Book and the Christian-themed, He Leadeth Me. In 1954 Dorothy Barker died of a heart attack. Barker was unable to pursue her art to any significant extent following her sister's death, as all the care of her aged mother devolved upon her, but she did manage to begin planning a stained glass window design in her sister's memory for St. Edmund's, Pitlake. 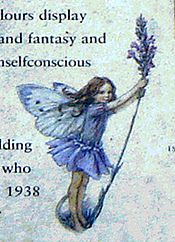 Barker's mother died in 1960, and, in 1961, Barker moved from 23 The Waldrons to 6 Duppas Avenue in Croydon. She restored a maisonette in Storrington, Sussex, England, bequeathed by her friend Edith Major, and named it St. Andrew's. After taking up residence, her health began to deteriorate. She was in and out of nursing and convalescent homes, and tended by relatives and friends.

Barker died at Worthing Hospital on 16 February 1973, aged 77 years. Two funeral services were held – one in Storrington Church and one in Barker's maisonette. Her ashes were scattered in Storrington churchyard. In 1989, Frederick Warne, a division of Penguin Books since 1983, acquired the Flower Fairies properties.

Barker worked principally in watercolor with pen-and-ink, but she was equally competent in black-and-white, in oils, and in pastels. She carried a sketchbook with her for capturing interesting children. She once indicated, "I have always tried to paint instinctively in a way that comes naturally to me, without any real thought or attention to artistic theories."

Kate Greenaway was a childhood favorite and an influence on her art. Barker's child subjects wear nostalgic clothing as Greenaway's children do, though Barker's children are less melancholy and less flat in appearance, due perhaps to advances in printing technology. Barker studied flowers with an analytical eye and was friend to children's illustrator, Margaret Tarrant. Along with Greenaway, illustrator Alice B. Woodward also influenced Barker's work.

The Pre-Raphaelites were a strong, lifelong influence on Barker. She once indicated, "I am to some extent influenced by them—not in any technical sense, but in the choice of subject matter and the feeling and atmosphere they could achieve." She admitted a fondness for the early paintings of John Everett Millais and "the wonderful things" of Edward Burne-Jones.

Barker's sketches, drawings, and paintings of children were given to friends or to the parents of the subjects, donated to charitable institutions and church sponsored events, or exhibited through various art organizations. She illustrated magazine covers, dust jackets, and produced series of postcards for Raphael Tuck and other publishers such as Picturesque Children of the Allies (1915), Seaside Holidays (1918), and Shakespeare's Boy and Girl Characters (1917, 1920). Her own Old Rhymes for All Times (1928) and The Lord of the Rushie River (1938), a tale about a girl who lives among swans on a riverbank, were critically well received. Set about 1800, Groundsel and Necklaces (1943) tells of a girl named Jenny who rescues her family from poverty through the agency of the fairies. The story features an old Scrooge-like man called Mr. Petercoo and tonally suggests a Dickensian social consciousness. Simon the Swan, intended as a sequel to Rushie River was outlined in 1943 with Groundsel, but only developed in 1953. It was published posthumously in 1988 and is critically considered less successful than Groundsel.

Barker was a devout Christian, and produced religious-themed works throughout her life. She published eight postcards and five guardian angel birthday cards for the Society for Promoting Christian Knowledge in 1916 and in 1923 respectively. Christmas cards were designed for The Girls' Friendly Society over a 20-year period, and the first three designs sold out a combined printing of 46,500 in 1923. An original design for the society called The Darling of the World Has Come was purchased by Queen Mary for £5.5.0 in 1926. The Croydon Art Society hung Barker's booklet cover design for the Society for the Propagation of the Gospel in its November 1919 exhibition.

Religious-themed books include The Children's Book of Hymns (1929) and He Leadeth Me (1933), the latter written in collaboration with her sister. Major religious works include the triptychs in oil, The Feeding of the Five Thousand (1929), for the chapel in Llandaff House, a home for destitute women at Penarth, Wales, and The Parable of the Great Supper (1934) for St. George's Chapel, Waddon. The Feeding has since disappeared, and only a black-and-white photograph dated 1929 reproduces the work. In 1941, she completed oil panels on the subject of the seven sacraments for the baptismal font at St. Andrew's, South Croydon. She designed baptismal rolls for the wall behind the font in 1948 and 1962. In 1946, she completed the 4 ft × 7 ft (1.2 m × 2.1 m) oil painting, Out of Great Tribulation, for the Memorial Chapel of Norbury Methodist Church. Following the death of her sister in 1954, Barker began designs for a stained glass memorial window depicting Christ preparing to wash the feet of his disciples. Her last religious-themed work, it was installed in St. Edmund's, Pitlake, in 1962.

All content from Kiddle encyclopedia articles (including the article images and facts) can be freely used under Attribution-ShareAlike license, unless stated otherwise. Cite this article:
Cicely Mary Barker Facts for Kids. Kiddle Encyclopedia.