Cinnamon Peak is a 2,727-metre (8,947-foot) mountain summit located in the northwestern part of Mount Robson Provincial Park, in the Canadian Rockies of British Columbia, Canada. It is situated immediately north of the confluence of the Robson River and the Fraser River, and is visible from the Yellowhead Highway near the park's visitor centre. The peak was labelled "Little Grizzly" on Arthur Oliver Wheeler's 1911 topographic map of Mount Robson. He thought it appeared similar to Mount Grizzly in the Selkirk Mountains, but the name was later changed to Cinnamon, which is the coloration of the peak and the Cinnamon bear, which can be easily mistaken for a grizzly bear. "Little Grizzly" is a colloquial term for the black bear, Ursus americanus. Eastern populations are typically black in color, however western populations can be cinnamon colored. The mountain's name was officially adopted in 1951 by the Geographical Names Board of Canada. Its nearest higher peak is Whitehorn Mountain, 6.0 km (3.7 mi) to the north. 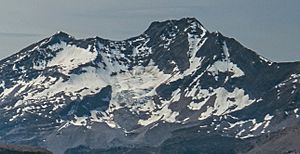 Based on the Köppen climate classification, Cinnamon Peak is located in a subarctic climate zone with cold, snowy winters, and mild summers. Temperatures in winter can drop below −20 °C with wind chill factors below −30 °C. This climate supports an unnamed glacier on the northeast slope of the mountain. In terms of offering favorable weather, June through September are usually the best months to view or climb the peak. Precipitation runoff from Cinnamon Peak drains into Swiftcurrent Creek and the Robson River, both of which are tributaries of the Fraser River. 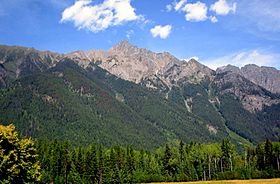 All content from Kiddle encyclopedia articles (including the article images and facts) can be freely used under Attribution-ShareAlike license, unless stated otherwise. Cite this article:
Cinnamon Peak Facts for Kids. Kiddle Encyclopedia.