City Tower (formerly Sunley House) is a 30-storey skyscraper situated in the Piccadilly Gardens area of Manchester, England. It is one of the highest office spaces currently available in Manchester, standing 107 metres (351 ft) tall. City Tower was completed in 1965, one of three buildings forming the Piccadilly Plaza complex which was constructed by the developers Bernard Sunley & Sons and designed by Covell, Matthews & Partners, 1959-65. It is currently the fourth tallest building in Manchester. The Tower has retail and leisure units on the ground floor and is Manchester's main radio transmitting station, which is located on the roof. The developer Bruntwood sold City Tower to the asset management company Schroders for £132 million in 2014 but kept their headquarters in the building.

The Piccadilly Plaza was remodelled by Leslie Jones Architects in 2001-02. City Tower stands at right angles to Piccadilly and the north-facing wall is covered with designs based on circuit boards. In the remodeling the building to the west of City Tower, Eagle Star House, was replaced by a building whose roofs are a pale echo of the swooping roofs of the original. 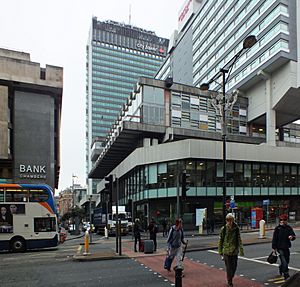 View of part of the Piccadilly Plaza, including City Tower

The Tower has entrances on York Street (renamed New York Street in 2008) and Piccadilly Gardens (formerly Parker Street). Over the years, the Tower became increasingly run down and many tenants left. A refurbishment programme was drawn up in the late 1990s, but this was never realised until Bruntwood purchased Piccadilly Plaza for £65 million in 2004. This plan is complete, with a new central ground floor entrance. The next phase involved repainting and fitting an atrium to the sides of the Tower. An advertising screen has been erected showing full motion video clips to passers-by in the Gardens.

The penthouse on floor 28 differs from the other floors as it originally had a walkway around the perimeter. When Bruntwood acquired City Tower, they removed the walkway and installed wider windows. The redesign included an overhang with floor to ceiling windows.

Although City Tower is not the tallest building in the city, the 28th floor is the highest commercial office space in Manchester. This floor was occupied by UKFast but now appears to be at least partly vacant.

All content from Kiddle encyclopedia articles (including the article images and facts) can be freely used under Attribution-ShareAlike license, unless stated otherwise. Cite this article:
City Tower, Manchester Facts for Kids. Kiddle Encyclopedia.