The clambake or clam bake, also known as the New England clambake, is a traditional method of cooking seafood, such as lobster, mussels, crabs, soft-shell clams, and quahogs. The food is traditionally cooked by steaming the ingredients over layers of seaweed. The shellfish can be supplemented with vegetables, such as onions, carrots, and corn on the cob. Clambakes are usually held on festive occasions along the coast of New England. 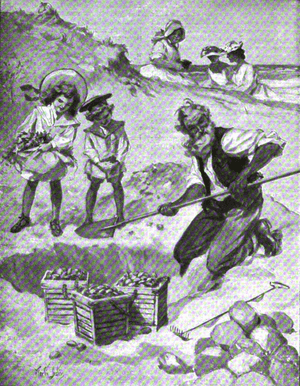 Illustration of a pit being dug in the beach sand in preparation for a traditional clambake, 1907

A typical clambake begins with gathering seaweed (traditionally rockweed – Ascophyllum nodosum) at the shoreline; seaweed is an important adjunct to cooking the food. To keep the seaweed fresh, it is necessary to have a container large enough to hold both the seaweed and a fair amount of sea water. 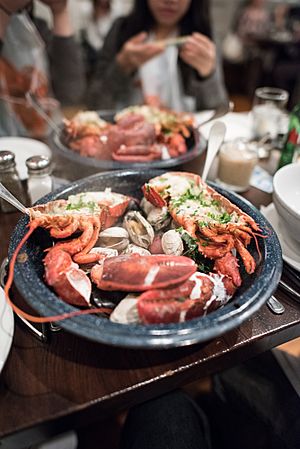 Also important are several round medium-sized stones, or sometimes cannonballs, which are heated in the fire and used to re-radiate heat during the cooking process.

Finally, like most other methods of steaming, a cover is necessary to allow the trapped heat and steam to thoroughly cook the food. Canvas tarps or potato sacks soaked in sea water are often used for this purpose.

Once the stones and seaweed have been collected, a fire pit is prepared. Some prefer to simply start a fire within the pit, while others line the edges with flat stones to provide support for a metal grill on which the stones may be placed.

The stones used for cooking are then placed in the center of the pit and a wood fire is started, although the exact method of heating the stones varies. The fire must burn until the stones are glowing hot. Care must be taken to ensure that the fire will burn out shortly after this optimal cooking temperature is achieved. The ashes are then swept off the stones and raked between them to form an insulating "bed." A layer of wet seaweed is placed over the stones, followed by traditional regional foods such as steamers, mussels, quahogs, and lobsters. Side dishes usually include corn on the cob, potatoes, carrots, and onions. Alternating layers of seaweed and food are piled on top and the entire mound is covered with canvas that has been drenched in water to seal in the heat and prevent the canvas from burning. The food is allowed to steam for several hours.

Since many locales outlaw building fires on beaches, and in order to accommodate the dish in homes or backyards, this dish is often prepared in a large pot. This is known as a New England clam boil. Some caterers specialize in clambakes on the beach.

Clambakes are also popular in Greater Cleveland, despite that region's not being near the Atlantic Ocean. A typical clambake there includes a dozen clams with half a chicken, sweet potatoes, corn, and other side dishes. Seaweed is not used and the clams, chicken, and sweet potatoes are all steamed together in a large pot. John D. Rockefeller started the tradition in Ohio.

All content from Kiddle encyclopedia articles (including the article images and facts) can be freely used under Attribution-ShareAlike license, unless stated otherwise. Cite this article:
Clambake Facts for Kids. Kiddle Encyclopedia.