George Hubbard Clapp Hall is a contributing property to the Schenley Farms National Historic District[1][2] on the campus of the University of Pittsburgh in the Oakland section of Pittsburgh, Pennsylvania. The six-story Gothic Revival structure, designed by Trautwein & Howard, was completed in 1956 and serves as the primary facility of the University of Pittsburgh Department of Biological Sciences. It contains laboratories, classrooms, a greenhouse, and an amphitheater-style lecture hall with 404 seats. 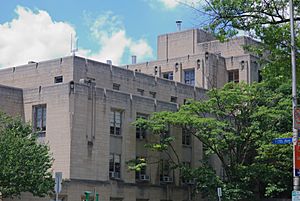 The Ruskin Street side of Clapp Hall

Clapp Hall was designed by Trautwein & Howard, a successor to architectural firm of Charles Klauder who designed the university's gothic Cathedral of Learning, Stephen Foster Memorial, and Heinz Memorial Chapel.

Clapp Hall's exterior and interior spaces have been described as a mix of Collegiate Gothic and Art Deco. The building features a diagonally-positioned entrance that creates a direct axis with the Cathedral of Learning which is framed in Clapp Hall's stone portal entryway. The building is clad in textured Indiana limestone to match the stone used on the Cathedral of Learning. The building's use of aluminum windows has been suggested to be a quiet homage to the work of aluminum magnate George Hubbard Clapp, the building's namesake. The lobby of Clapp Hall is streamlined Art Deco in character, with terrazzo flooring and stainless steel doors, and is thus more stylistically modern than its exterior which is meant to reflect the Cathedral of Learning. It has been suggested that the lobby reveals a struggle in the design process to find a balance between the traditional gothic and more contemporary design elements. 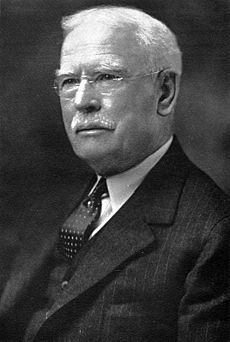 The 3-acre (12,000 m2) plot of land that Clapp Hall was constructed on was purchased for $675,000 ($5.4 million today) as a gift for the university by the A.W. Mellon Educational and Charitable Trust. Ground was broken for Clapp Hall in 1954 and the building was completed in 1956. The six-story building cost $2.5 million ($19.6 million today) and it was initially used only for freshman chemistry, although other sciences soon moved into the building. it is conjoined with Langley and Crawford Halls, which were added in later stages, and forms the three-building Clapp/Langley/Crawford Complex. The triangular courtyard at the southwest entry to Clapp Hall, facing the Cathedral of Learning, was modified in 2004 to accommodate trees and benches.

The building is named for George Hubbard Clapp (1858–1949), an alumnus (class of 1877) and president of Pitt's Board of Trustees for more than 40 years. Clapp was one of five responsible for the first commercial production of aluminum and was a founder of the Aluminum Company of America.

All content from Kiddle encyclopedia articles (including the article images and facts) can be freely used under Attribution-ShareAlike license, unless stated otherwise. Cite this article:
Clapp Hall Facts for Kids. Kiddle Encyclopedia.