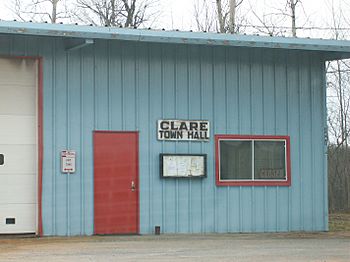 Clare is a town in St. Lawrence County, New York, United States. The population was 105 at the 2010 census.

The Town of Clare is in the south-central part of the county and is south of the Village of Canton, the county seat.

The Town of Clare, formed in 1880 from part of the Town of Peirrepont, was the last town formed in the county. Madam De Stael, a French author, at one time invested in the town lands, on the advice of her friend Gouverneur Morris, while it was still part of Pierrepont.

A history in 1894 indicated that almost no business existed in the town, and there were no organized churches.

The Clare Town Hall was listed on the National Register of Historic Places in 2004.

The town is in the Adirondack Park, and two branches of the Grasse River flow through the town.

There were 46 households out of which 28.3% had children under the age of 18 living with them, 65.2% were married couples] living together, 4.3% had a female householder with no husband present, and 28.3% were non-families. 26.1% of all households were made up of individuals and 8.7% had someone living alone who was 65 years of age or older. The average household size was 2.43 and the average family size was 2.91.

Communities and locations in Clare

All content from Kiddle encyclopedia articles (including the article images and facts) can be freely used under Attribution-ShareAlike license, unless stated otherwise. Cite this article:
Clare, New York Facts for Kids. Kiddle Encyclopedia.