Clarence P. Townsley was born in De Kalb, New York on September 24, 1855, a son of Elias P. Townsley and his wife Louise Thompson. Townsley's grandfather Gideon had served as the town's postmaster, was elected town supervisor, and operated a tannery close to the Oswegatchie River. Townsley's father also served as postmaster and town supervisor, and was elected to the New York State Assembly.

Townsley attended preparatory school at St. Lawrence Academy and the State Normal School, both in Potsdam. He then attended Union College in Schenectady, New York, from which he graduated in 1876. He spent a year in Sioux City, Iowa working as a civil engineer on the Covington, Columbus and Black Hills Railroad. In July 1877 he was appointed to the United States Military Academy. Townsley graduated in 1881, ranked 14th of 53, and was appointed a second lieutenant of Field Artillery. 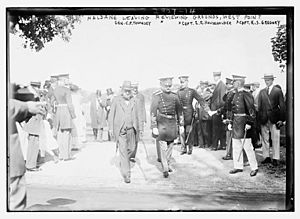 In 1912, Townsley was appointed as superintendent of the United States Military Academy. He was still serving as West Point's superintendent at the outbreak of World War I, and continued in this post until July 1916, when he was promoted to brigadier general and returned to Coast Artillery duty. As the Army prepared for entry into the war, Townsley commanded the South Atlantic Coast Artillery District, then was assigned to the Philippines, where he inspected the artillery emplacements of Manila and Subic Bays.

Recalled to the United States to train and command the 30th Division, Townsley was promoted to temporary major general before leading his division to France. Townsley later returned to the United States because of illness, and was on medical leave at Walter Reed Hospital until just before the Armistice of 11 November 1918 that ended the war. He briefly commanded the North Pacific Coast Artillery District before retiring in December 1918.

Townsley died in Washington, D.C. on December 28, 1926. He was buried at West Point Cemetery in West Point, New York.

All content from Kiddle encyclopedia articles (including the article images and facts) can be freely used under Attribution-ShareAlike license, unless stated otherwise. Cite this article:
Clarence Page Townsley Facts for Kids. Kiddle Encyclopedia.