For several decades, many Jewish reformers and Zionist nationalists had argued that Jews needed to become "a normal nation" and urged the abandonment of both urban living and occupations traditionally associated with Jews. This back-to-the-land movement urged Jews to find a purer life and to renounce sedentary jobs in favor of those based on manual labor. The project was funded by the Jewish Agricultural and Colonial Association of which Benjamin Brown was president and Isaac Herbst secretary. Brown organized the JACA in January 1910 and listed its primary office in Philadelphia's West Parkside neighborhood, with 250 members, branches in New York and Baltimore, and with the express purpose of, "Settling on farms and mutual aid".

Brown and Herbst, as representatives of the organization, traveled in 1911 to investigate potential sites in New Mexico, Colorado, Wyoming, and Montana. The New Mexico option proved to be impractically expensive. As the disappointed investigators were preparing to leave New Mexico, they received a telegram suggesting a stop in Utah. The state was at the time engaged in a campaign to attract settlers, and in the process of constructing the Piute Canal, which was to irrigate vast tracts of desert. The Association was also encouraged by the financially secure and politically well-connected Jewish community of Salt Lake City. Such prominent local Jews as Simon Bamberger, Samuel Newhouse, and attorney Daniel Alexander pledged their support and began to advocate for the group with area business and political leaders. The Utah State Board of Land Commissioners sent a representative to escort Brown and Herbst to inspect available land. They were favorably impressed with a parcel of state-owned land in south-central Utah below the planned Piute Canal. Brown was convinced of the soil's fertility, and with the state's assurances of available water, the Association agreed to purchase the land at auction on August 7, 1911.

After purchasing the territory in Clarion, Benjamin Brown and twelve original colonists "chosen for their mechanical skills, experience with horses, and ‘seriousness,’” arrived at the settlement on September 10, 1911. The Clarion location offered seemingly cultivatable land that was sufficiently large enough to handle the group of incoming colonists, and was strategically located near a railroad depot, easily connecting the territory to Salt Lake City. The original occupants of the land, however, were initially surprised to encounter land that, despite promoted as fertile, had a short growing season. But, the colonists nonetheless dug irrigation channels from the nearby canal and began to plant their crops such as wheat, oats and alfalfa. Although the settlement was small, with just 23 families, optimism was high. Utah had been advertising nationally to receive more settlers, and Governor William Spry was so pleased with the experiment that he journeyed the 135 miles (217 km) from the capital in order to celebrate the community's first harvest.

By May 1912, the colonists quickly began to see their investment pay off, as they were able to harvest their crops while new families frequently arrived at the site. However, the colonists were simultaneously plagued by dust storms, heat, strong winds, flies and mosquitoes, which, when combined with a scarcity of water, doomed their harvest: six-hundred acres produced only half of their expected yield. In the fallout of the year's poor performing harvest, the colony decided that having individual control over the territory would be more beneficial. Shortly thereafter, forty-acre lots of land began to replace collective work and ownership of the property. By October 1912, there were about 150 families at the colony when the Jewish Agricultural and Colonial Association announced that one hundred and fifty additional families would join the settlement.

While the individual plots of land were not uniform in terms of soil quality, they did lead to more success in terms of crops in the Spring of 1913. Combined with the construction of a well to make water more accessible, the population of Clarion continued to grow, and the colony as a whole started to show signs of stability. However, through the Summer and Fall, severe weather frequently challenged living and planting conditions, as well as the stamina of the colonists, which, combined with a water shortage, devastated the 1914 harvest.

By 1915, the population of Clarion had decreased by almost two-thirds, and a second consecutive poor harvest during the year led to even more residents leaving in the pursuit of industrial labor opportunities in major cities such as New York and Chicago. Ultimately, a state order terminated the colony’s title on November 25, 1915. Shortly thereafter, in January 1916, the state of Utah began to auction off the colony’s land. Although some colonists remained, as only about one-tenth of the total tract was sold, most of the Jewish residents left within three or four years of the sale of the territory. 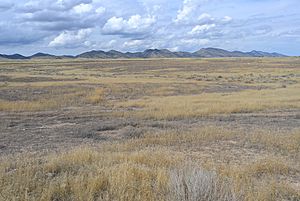 After the demise of the Jewish colony, others moved into the area. Japanese families settled in the Clarion area in 1921, as did Mormons of Scandinavian descent. Brown and a few of the other Jewish colonists stayed and farmed in the area until the 1920s. There were enough persons residing in Clarion in 1925 to establish the Clarion LDS Ward. Friedland observed the Japanese families when he returned to the Clarion site in 1926. In 1932, the Clarion LDS Ward had 166 members. The Ward met in the social hall which the Jewish settlers had constructed. The LDS Ward was dissolved on April 1, 1934, "on account of the shortage of water." World War II disrupted the Japanese settlement and the land reverted to the local citizens.

By 1959 the Clarion community center had been turned into a granary. The fence surrounding the small Jewish cemetery had been torn down and cows had knocked down the headstones which marked the two graves.

By 2008 fences had been constructed to surround the Jewish graves. There are a scattering of foundations, as well as the broken walls of the water cistern that burst and fell apart the first day colonists used it. At the time of the centenary in 2011, Brown Rex Dairy abutted the Clarion site and local residents continued to refer to the area as "Clarion" although it is in the Centerfield postal district. 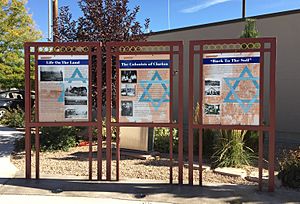 University of Utah Professor Robert Goldberg chanced upon the Clarion remnants in 1980. A subsequent interview in Los Angeles with a descendant of one of the Clarion families led to Goldberg's writing the Jewish colony's history, Back to the Soil. Goldberg placed advertisements for contacts in the Salt Lake Jewish community newsletter. He tracked down 53 families with ties to Clarion, and reconstructed the story from interviews and records. Goldberg's papers are archived and accessible through the University of Utah in the Robert Alan Goldberg papers which include diaries, monographs, and news articles by or regarding the Clarion participants, as well as interviews, research questionnaires, and correspondence with their descendants.

Clarion was featured in the play "Life, More Sweet Than Bitter" which tells the story of a Jewish family from Russia which came through Philadelphia to Clarion. Beth Hatefutsoth in Tel Aviv included Clarion in the 1983 exhibit, "Diaspora Farmers of the 19th and 20th Century". The community was also featured in a segment in the 2007 play Impossible Cities: A Utopian Experiment. The settlement was the subject of a presentation in June 2013 at Congregation Shivtei Yeshuron-Ezras Israel in the South Philadelphia neighborhood from which many of the Clarion colonists originated as part of the "Hidden City Philadelphia Festival 2013".

In September 2011 a celebration to mark the 100th anniversary of the settlement was celebrated in Salt Lake City. Tours of the site were featured.

All content from Kiddle encyclopedia articles (including the article images and facts) can be freely used under Attribution-ShareAlike license, unless stated otherwise. Cite this article:
Clarion, Utah Facts for Kids. Kiddle Encyclopedia.