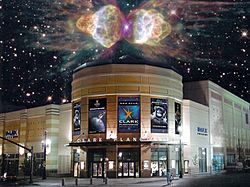 This theater is the first "pitless" digital dome planetarium in the United States. The dome is a 55-foot (16.8 m) perforated aluminum dome manufactured by Astro-tec Manufacturing Inc. The theater seats 190 and features individual interactive seat button controls. In September, 2018 the theater was closed due to renovations replacing the seats with new chairs. Designed around Evans & Sutherland's Digistar planetarium system, two super-high resolution projectors work together to blend a single seamless video stream over the entire dome. What results is an entirely new way to experience the universe, in 3 dimensions (no glasses required) with a resolution far beyond high definition video. The new system installed in 2011 can display 4096 X 4096 resolution and 60 frames per second.

A specially tuned 13,000 watt sound system with 5.1 surround sound and 21 speakers is installed behind the screen. Shows in this hemispherical theater cover a variety of space-related themes, from fully immersive 3D productions to live-narrated current events programs to family shows to music entertainment performance. Clark Planetarium Productions is one of the few informal science education institutions with the resources to create and distribute its own fulldome animation content.

The Clark Planetarium features 10,000 square feet (930 m2) of free exhibits including the newly installed "Science on a Sphere," a computer animation globe by NOAA. Also unique is "Newton's Daydream," the most ambitious audio-kinetic sculpture ever created by artist George Rhoads. Other popular exhibits include a Foucault pendulum, Earth Globe, Meteorites, Telescope displays, and updating video from the Hubble Space Telescope and NASA TV. The Clark Planetarium is also one of the few institutions to have an authentic moon rock sample on permanent loan from NASA. This rock was obtained from the Apollo 15 mission and is displayed in a special exhibit showing the Apollo moon landings and video footage of the astronauts collecting the displayed sample rock. New exhibits are added on a regular basis, including a rocketry display by ATK Launch Systems of Utah, a Solar Energy exhibit, and "Weight on Other Worlds."

The education department at the planetarium serves over 75,000 school children a year through field trips and traveling science education programs throughout the state of Utah. Outreach programs include auditorium programs which showcase some of the best interactive science demonstrations possible. In-depth visits to 6th grades focus on aspects of their astronomy curriculum, and star parties provide opportunities to directly view many celestial objects. Topics include electricity, Newton's laws of motion, phases of the moon, seasons, distance and scale, planets, the solar system, and other science interest topics.

All content from Kiddle encyclopedia articles (including the article images and facts) can be freely used under Attribution-ShareAlike license, unless stated otherwise. Cite this article:
Clark Planetarium Facts for Kids. Kiddle Encyclopedia.