Clawson is a town in Emery County, Utah, United States. The population was 163 at the 2010 census.

A canal to carry water from Ferron Creek was completed in 1896. Prior to being settled the area was known as North Flat. In 1897, the first settlers arrived, calling the community "Kingsville" after Guy King, who was one of the original settlers. The first school was opened in 1898 in the home of Guy King with Florence Barney as the teacher. She rode 14 miles (23 km) on horseback each day to the school. 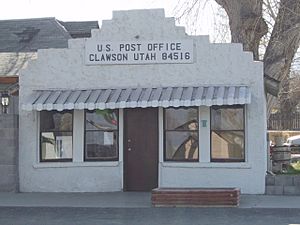 In 1902, the President of the Emery Stake, Reuben C. Miller, sent the bishopric of Ferron to select a permanent spot for the town of Kingsville. There were two candidate locations: the homesteads and the Westingkow farm 2 miles (3 km) west of that. The bishop decided it should be near the Westingkow farm because the lay of the land suggested that the old location could become swampy. Although the settlers initially disagreed, they consented, purchased the Westingkow farm, and moved their log cabins two miles to the west.

On October 25, 1904, LDS Church Apostle Rudger Clawson of the Quorum of the Twelve Apostles came and organized a ward. The name of the town was changed from Kingston to Clawson in his honor.

After decades of existing as an unincorporated community, Clawson was incorporated as a town in 1981.

Clawson is located in northwestern Emery County along Utah State Route 10. It is 7 miles (11 km) southwest of Castle Dale, the county seat, and 3.5 miles (5.6 km) northeast of Ferron.

According to the United States Census Bureau, the town of Clawson has a total area of 0.69 square miles (1.8 km2), all of it land.

This climatic region is typified by large seasonal temperature differences, with warm to hot (and often humid) summers and cold (sometimes severely cold) winters. According to the Köppen Climate Classification system, Clawson has a humid continental climate, abbreviated "Dfb" on climate maps.

There were 48 households out of which 45.8% had children under the age of 18 living with them, 77.1% were married couples living together, 6.3% had a female householder with no husband present, and 16.7% were non-families. 14.6% of all households were made up of individuals and 6.3% had someone living alone who was 65 years of age or older. The average household size was 3.19 and the average family size was 3.58.

All content from Kiddle encyclopedia articles (including the article images and facts) can be freely used under Attribution-ShareAlike license, unless stated otherwise. Cite this article:
Clawson, Utah Facts for Kids. Kiddle Encyclopedia.