Castle Dale is a city in northwestern Emery County, Utah, United States. The population was 1,630 at the 2010 census. It is the county seat of Emery County. 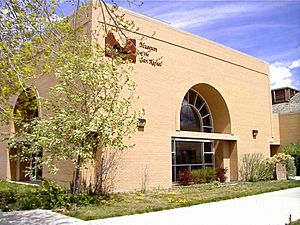 Museum of the San Rafael

Castle Dale, the seat of Emery County government, is located on Cottonwood Creek in Castle Valley, a region of benchlands and river valleys bounded by the Wasatch Plateau to the west and the striking buttes, mesas, and canyons of the San Rafael Swell to the east. The high plateau barrier and the ruggedness of the Castle Valley landscape delayed settlement of the region until the late 1870s, when population growth and expanding livestock herds in Utah's central valleys stimulated a search for new agricultural and grazing lands. In 1875, brothers Orange Seely and Justus Wellington Seely, Jr., first brought the Mount Pleasant cooperative cattle and sheep herds to winter on Cottonwood Creek. On 22 August 1877 Brigham Young issued a formal call for settlers to locate in Castle Valley, the last such directive from the "Great Colonizer" before his death on 29 August. Orange Seely was appointed LDS bishop of the entire region east of the Wasatch Plateau, including present-day Emery, Carbon, and Grand counties. Local tradition describes Bishop Seely as a man of immense girth who made his pastoral rounds riding one mule and leading another laden with staple food items to be distributed to needy families, blacksmith tools for the shoeing of horses and sharpening of plowshares, and dental forceps to remove aching teeth.

The 1880 census found 237 people residing on homesteads strung along more than 6 miles (10 km) of Cottonwood Creek. In that year two townsites were surveyed, one known as Upper Castle Dale and the other as Lower Castle Dale. In 1882 Upper Castle Dale took the name Orangeville in honor of Orange Seely, even though he resided in the lower town. The two communities, only 3 miles (5 km) apart, have had closely related histories, but Castle Dale has been home to the main public institutions.

The period from 1890 to 1910 brought a doubling of Castle Dale's population, from 409 to 848. The town expanded from the original plat on a sloping shelf beside the creek onto the adjacent benchlands. A two-story brick courthouse was erected in 1892. The Emery Stake Academy, founded in 1889 as the first high-school level educational institution in southeastern Utah, occupied a new two-story brick building in 1899, then moved in 1910 to a larger three-story building on the bench. This period also saw the town's incorporation (1900), the building of several commercial structures, the establishment (in 1900) of a weekly newspaper, the Emery County Progress, the first electric service (1906), and the Emery County Bank (1906).

The following decades saw little additional growth but did bring improvements in public services. A culinary water system and a telephone system were installed in about 1914. In 1922 the Emery Stake Academy was sold to the Emery County School District and became Central High School.

Like the other communities in western Emery County, for most of its history Castle Dale has depended on an economic base of farming and livestock raising, supplemented by coal mining. The community was hard hit by the Great Depression of the 1930s, when mining unemployment and low prices for farm products combined with a devastating drought. The local bank was merged with a bank in Price, leaving Emery County without banking services. During the same period, however, the Wilberg Resort, situated in a grove of trees 4 miles (6 km) north of town, enjoyed great success as a recreation center for Emery and Carbon counties, with several hundred people typically attending the Saturday night dances.

The period from 1940 to 1970 saw a decline in Castle Dale's population, from 953 to 541. Once the educational center of the region, the town lost its high school in a county school consolidation in 1943. A portent of a brighter economic future came when Congress approved the Emery County Reclamation Project in 1956. The central feature of the project, the Joe's Valley Reservoir, completed in 1966, for the first time provided long-term water storage, improving the supply for irrigation and making additional water available for industrial uses. The same period brought an improvement in the level of public services throughout western Emery County, with the installation of a modern telephone system, improved water and sewage systems, a relay station to direct television signals from Salt Lake City stations past the barrier of the Wasatch Plateau, as well as upgraded police and fire protection being provided. As the county government center, Castle Dale benefited substantially from the expansion of county services. The town's central place in education was reestablished in 1962 when North and South Emery high schools were consolidated into Emery County High School, located at Castle Dale. 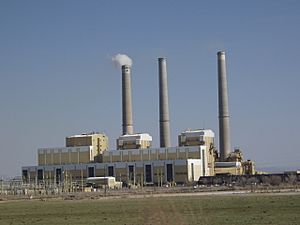 Emery County received a fresh economic stimulus in the mid-1970s when Utah Power and Light Company began construction of two large steam-electric generating plants designed to use the extensive coal deposits in the region. The larger of the two, the Hunter Plant, is located 2 miles (3 km) south of Castle Dale, and the mines that supply it are northwest of town in the ledges of the Wasatch Plateau. After a "boom" period during construction of the plants, Castle Dale has settled in recent years into a more stable community with a population more than double that of its historic level and with continuing improvement in public services. The town's population in 1990 was 1,704, plus an additional 1,459 in the "twin" community of Orangeville.

Castle Dale lies on the north side of Cottonwood Creek, a tributary of the San Rafael River, in Castle Valley.

According to the United States Census Bureau, the city has a total area of 2.2 square miles (5.6 km2), all of it land.

There were 508 households, out of which 49.2% had children under the age of 18 living with them, 72.6% were married couples living together, 7.1% had a female householder with no husband present, and 17.3% were non-families. 15.6% of all households were made up of individuals, and 7.9% had someone living alone who was 65 years of age or older. The average household size was 3.22 and the average family size was 3.60.

All content from Kiddle encyclopedia articles (including the article images and facts) can be freely used under Attribution-ShareAlike license, unless stated otherwise. Cite this article:
Castle Dale, Utah Facts for Kids. Kiddle Encyclopedia.