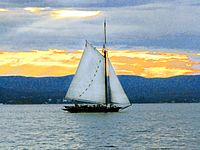 The Clearwater Festival (officially the Great Hudson River Revival) is a music and environmental summer festival and America’s oldest and largest annual festival of its kind. This unique event has hosted over 15,000 people on a weekend in June for more than three decades. All proceeds benefit Hudson River Sloop Clearwater, Inc., a 501(c)(3) nonprofit environmental organization.

The festival, a celebration for the Hudson River, features singer-songwriters, performers and musicians offering fun with a purpose — a diverse mix of contemporary, traditional and American Roots music, dance, family-oriented entertainment and storytelling. In addition to music and dance, a juried craft show, Green Living Expo, working waterfront, environmental education sites, and a "circle of song" featuring audience participation fill out the weekend's schedule.

All behind-the-scenes elements, such as the seven sustainable biodiesel-powered stages, recycling of food waste, volunteer meal preparation, and sponsor selection, are done with goals of sustainability and social responsibility in mind. Use of carpooling, bicycling, and public transportation are encouraged. The entire festival is wheelchair-accessible and staffed with American Sign Language interpreters. Clearwater was one of the first festivals to provide ASL interpreters, with 16 working at the 2011 event. The festival also includes services for the disabled, including 20 on-site wheelchairs and seating in front of every stage. 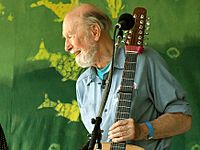 Pete Seeger at the 2007 Clearwater Festival

In 2009, the festival celebrated several auspicious occasions, including the 40th anniversary of the launch of the sloop Clearwater, the 90th birthday of Pete Seeger and the 400th anniversary of Henry Hudson’s voyage up the river on the Half Moon. Fittingly, festival performers included some longtime folk-centric Clearwater traditions as well as many new artists who made their first appearance at the festival. First-timers in 2009 included veteran vocal group The Persuasions, Grace Potter & The Nocturnals, psychedelic rock band Dr. Dog, Elvis Perkins in Dearland and A.C. Newman, as well as singer-songwriters Alejandro Escovedo and Allison Moorer, plus bluegrass/jam band acts Old Crow Medicine Show and Cornmeal, and the festival's first-ever hip-hop act ReadNex Poetry Squad.

Emphasizing the importance of the Hudson River to the festival, Hudson River Sloop Clearwater has added a number of river front activities such as kayaking and rowboating, and rides on the tall ships Clearwater, Mystic Whaler, and Woody Guthrie.

History of the festival

The festival was founded in the wake of the Storm King Mountain controversy that focused on the Hudson River from 1963 - 1982. The Festival has also had its origins in the Sloop Clearwater itself. To raise money to build the Sloop, Hudson River Sloop Clearwater founders Pete Seeger and friends held a series of small fundraising concerts in the Hudson River Valley and at Sandy Hook in New Jersey, and passed a banjo around the crowd to collect donations. By 1978, the concerts had evolved into a land-based Festival at Croton Point Park, which hosted the Festival for a decade, until pollution problems from the park's landfill forced a relocation to a suburban college campus. It was not until 1999 that the Festival was able to move back to the park and the shores of the Hudson River. The 2016 festival, which would have been the 50th anniversary of the festival, was cancelled so that resources could be directed to a substantial restoration of the sloop Clearwater. The festival returned in 2017.

Mission of the festival

The Great Hudson River Revival is produced by Hudson River Sloop Clearwater, Inc., a nonprofit, member-supported, environmental organization, to raise funds and consciousness on the plight of the river and the earth, as well as uniting the community around the river. All proceeds go directly to support Clearwater’s environmental research, education, and advocacy to help preserve and protect the river and its tributaries, as well as communities in the river valley.

The Festival makes possible innovative educational initiatives such as Clearwater’s New Hudson River School, which has helped more than 430,000 young people and over 250,000 adults experience the wonders of the River from aboard the Sloop Clearwater.

All content from Kiddle encyclopedia articles (including the article images and facts) can be freely used under Attribution-ShareAlike license, unless stated otherwise. Cite this article:
Clearwater Festival Facts for Kids. Kiddle Encyclopedia.