Clinton is the county seat of Van Buren County, Arkansas, United States. The population was 2,602 at the 2010 census, making it the most populous city in the county (reclaiming the distinction from the resort community of Fairfield Bay). The city was named for DeWitt Clinton, the New York governor who built the Erie Canal; he had also been a U.S. Senator from New York.

The City of Clinton is situated on the shore of the Archey Fork, a tributary of the Upper Little Red River which flows into Greers Ferry Lake. This body of water is known for its rich and diverse fish habitat and recreational uses. A channelization project in 1982 following a major flood event has recently been re-engineered by The Nature Conservancy in cooperation with city officials and corporate sponsors. The multi-phase restoration project has witnessed the installation of a cantilevered stream bed, bank stabilization, and habitat regeneration. The restoration is now part of the city's historic downtown park and trail system.

The National Championship Chuckwagon Races are held annually at the Bar of Ranch in Clinton. The event is a major tourist attraction drawing many thousands to the area each Labor Day weekend with rodeo and futurity events, auctions, live music performances, and the grand finale Snowy River race. 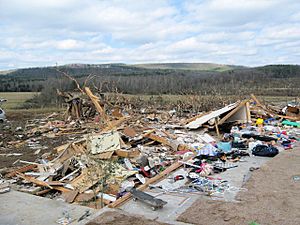 Tornado damage to a house in Clinton

On February 5, 2008 an EF4 tornado struck Clinton, killing three people and destroying many homes and businesses, including a boat manufacturing facility.

Public education for elementary and secondary students is available from the Clinton School District with students graduating from Clinton High School. The Clinton mascot and athletic emblem is the Yellowjacket.

All content from Kiddle encyclopedia articles (including the article images and facts) can be freely used under Attribution-ShareAlike license, unless stated otherwise. Cite this article:
Clinton, Arkansas Facts for Kids. Kiddle Encyclopedia.