Coastline of Australia facts for kids 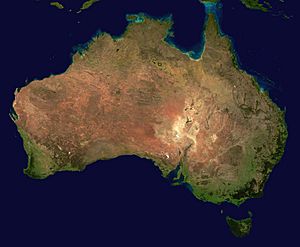 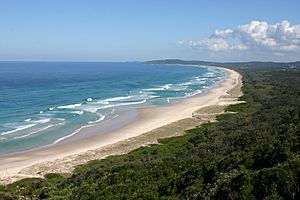 The coastline of Australia comprises the coasts of mainland Australia and Tasmania. It nominally includes a part of all Australian states and territories; the otherwise landlocked Australian Capital Territory has a coastal enclave at Jervis Bay Territory.

By some measurements it is the 6th longest coastline in the world.

Due to the historical context of European discovery and exploration, the coastline has been the first point of contact over 400 years.

In the IBRA bioregionalisation the coast has 36 coastal bioregions that define the whole coast and there is the more complex Integrated Marine and Coastal Regionalisation of Australia, which includes ecological features that are beyond the shoreline.

All content from Kiddle encyclopedia articles (including the article images and facts) can be freely used under Attribution-ShareAlike license, unless stated otherwise. Cite this article:
Coastline of Australia Facts for Kids. Kiddle Encyclopedia.