The Ningaloo Coast is a World Heritage Site located in the north west coastal region of Western Australia. The 705,015-hectare (1,742,130-acre) heritage-listed area is located approximately 1,200 kilometres (750 mi) north of Perth, along the East Indian Ocean. The distinctive Ningaloo Reef that fringes the Ningaloo Coast is 260 kilometres (160 mi) long and is Australia's largest fringing coral reef and the only large reef positioned very close to a landmass. The Muiron Islands and Cape Farquhar are within this coastal zone.

The coast and reef draw their name from the Australian Aboriginal Wajarri language word ningaloo meaning "promontory", "deepwater", or "high land jutting into the sea". The Yamatji peoples of the Baiyungu and Yinigudura clans have inhabited the area for over 30,000 years. 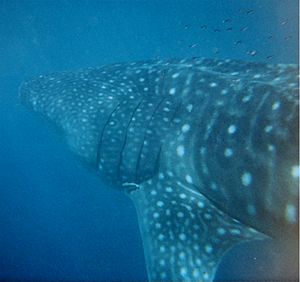 Whale shark at the reef located off the Ningaloo Coast 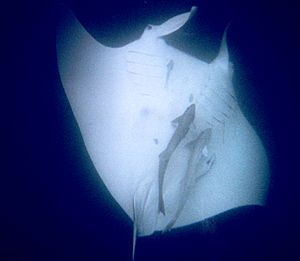 A manta ray with remoras at Ningaloo Reef. 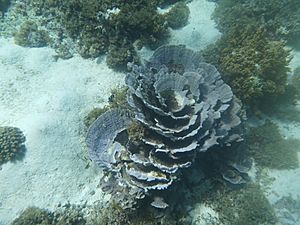 Part of the coral reef pictured underwater in 2012. 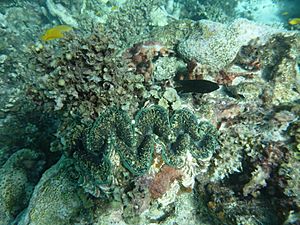 A large clam pictured underwater in 2012. 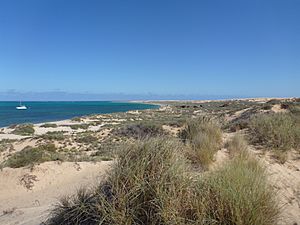 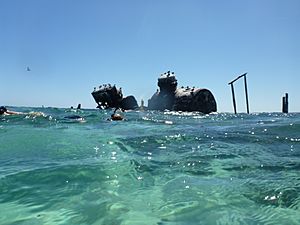 Divers explore a ship wreck adjacent to the coral reef. 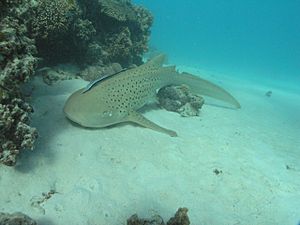 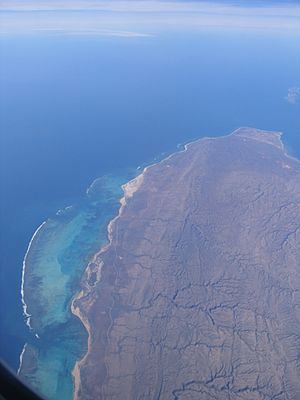 Cape Range National Park and Ningaloo Reef from the air.

In 1987, the reef and surrounding waters were designated as the Ningaloo Marine Park.

Although most famed for its whale sharks which feed there during March to June, the reef is also rich in coral and other marine life. During the winter months, the reef is part of the migratory routes for dolphins, dugongs, manta rays and humpback whales. The beaches of the reef are an important breeding ground of the loggerhead, green and hawksbill turtles. They also depend on the reef for nesting and food. The Ningaloo supports an abundance of fish (500 species), corals (300 species), molluscs (600 species) and many other marine invertebrates.

The reef is less than 0.5 kilometres (0.31 mi) offshore in some areas, such as Coral Bay. In 2006, researchers from the Australian Institute of Marine Science discovered gardens of sponges in the marine park's deeper waters that are thought to be species completely new to science. The short-nosed sea snake, thought to have been extinct for 17 years, was found on Ningaloo Reef in December 2015.

The Ningaloo Collaboration Cluster is a major research project that commenced in the region in 2007. It is part of the CSIRO flagship Collaboration Fund Research Initiative. The project involves researchers from the CSIRO, Sustainable Tourism Cooperative Research Centre and a range of Australian Universities including Curtin University of Technology, Murdoch University, University of Western Australia, Australian National University and the University of Queensland. The project will deliver a dynamic model of Ningaloo incorporating socioeconomic and environmental load implications of human activity in the region that can be integrated with an ecological model of the region with the ultimate aim of developing planning tools and management models to ensure sustainable use of the region.

The study involves the collection and processing of socioeconomic data from tourists and the host communities of Exmouth, Coral Bay and Carnarvon. It also involves the collection of data concerning the environmental load of human activity including natural resource use, waste generation, pollution, visual impacts and impacts on flora and fauna. The interactive project involves key stakeholders in the region including the WA Department of Environment and Conservation, the Shires of Carnarvon and Exmouth, local tourism organisations and Tourism WA, the Gascoyne Development Commission, the WA Department of Water and Environment, researchers from Wealth from the Oceans and Ningaloo Project, Chambers of Commerce, WA Department of Energy and Resources, WA Department of Fisheries, the WA Department for Planning and Infrastructure, the Ningaloo Sustainable Development Committee and Ningaloo Sustainable Development Office, Yamatji Land and Sea Council representatives, and the Ningaloo research community along with other cluster project members and the state's Ningaloo project. The project also engages with planners and managers in the region to examine tourism development and management. 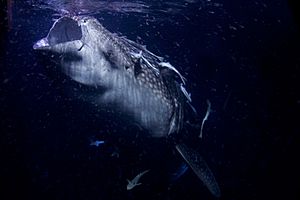 Ningaloo Coast is a designated weather forecast area, by the Bureau of Meteorology.

All content from Kiddle encyclopedia articles (including the article images and facts) can be freely used under Attribution-ShareAlike license, unless stated otherwise. Cite this article:
Ningaloo Coast Facts for Kids. Kiddle Encyclopedia.