Coburg is a city (and a National Historic District) in Lane County, Oregon, United States, 8 miles (13 km) north of Eugene. The city's population as of the 2010 census was 1,035. Founded in 1847, Coburg has retained the characteristics of traditional small town with walkable and close ties to the surrounding farming communities that stretch in all directions. Maintaining these characteristics is the central part of the city's community vision process completed in 2017. (source: Travel Lane County and City of Coburg)

The city was originally named Diamond after John Diamond, an early pioneer in the area, on whose land claim the city was located. The city's current name comes from a stallion that was named after the Coburg district of Bavaria, Germany, from whence the horse had been imported. The Coburg Historic District was placed on the National Register of Historic Places in 1986. The period of significance of the buildings in the district dates back to 1875.

According to the United States Census Bureau, the city has a total area of 0.95 square miles (2.46 km2), all of it land.

Coburg is situated near the Coburg Hills. 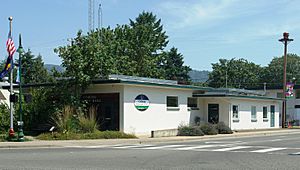 There were 398 households, of which 33.7% had children under the age of 18 living with them, 59.0% were married couples living together, 8.3% had a female householder with no husband present, 3.8% had a male householder with no wife present, and 28.9% were non-families. 20.6% of all households were made up of individuals, and 5.8% had someone living alone who was 65 years of age or older. The average household size was 2.60 and the average family size was 3.00.

Downtown is a national historic center that includes 30 buildings on the register. Coburg is known for its attractive downtown, agricultural business connections, antique shops and annual antique fair. Beginning in 2018, Coburg will host the Pacific Northwest Marathon. (Source PNWM and City of Coburg) Several manufacturers are located along the I-5 corridor in Coburg.

Coburg is headquarters for Marathon Coach Corporation, a manufacturer of luxury bus conversion motorcoaches. Marathon Coach has a manufacturing plant in Coburg, as well as plants in Grand Prairie, Texas, and San Antonio, Florida. Other businesses include APEL Extrusions.

Until the practice was discontinued in 2005, Coburg's city government had generated hundreds of thousands of dollars for its budget through speeding fines at a speed trap on Interstate 5 located outside of city limits. By 2003, the city was raising nearly half of its $1.7 million annual budget through traffic fines. The speed trap was temporarily ended when Floyd Prozanski, a state legislator from Eugene, sponsored bills to make the practice against the law, effective January 2004. Police Chief Hudson also lost his job, following the adoption of the new law. However, the city annexed a segment of I-5, which enabled the continuation of some revenue from traffic fines to motorists in this area.

All content from Kiddle encyclopedia articles (including the article images and facts) can be freely used under Attribution-ShareAlike license, unless stated otherwise. Cite this article:
Coburg, Oregon Facts for Kids. Kiddle Encyclopedia.