Coccoliths are the microscopic plates which form chalk. They are made by one of the most important eukaryote phytoplankton. These are single celled protists whose full name is coccolithophorids or coccolithophores. The spherical skeleton of coccoliths is a coccosphere.

Chalk makes up much of the marine strata in the Upper Cretaceous period, and is 95% to 99% made up of coccoliths, the calcium carbonate (CaCO3) plates which coccolithophorids produce.

Coccoliths were first examined by Cristian Gottfried Ehrenberg (1795–1875), who thought they were inorganic products. They were named, and identified as made by living organisms by Thomas Henry Huxley, who realised they were a major part of the rock we call chalk. The story of how the tiny cell produces its coccosphere is told by Westbroek:

"The tiny coccolith-generating alga... is geological dynamite, a formidable force helping to conduct vast fluxes of calcium and carbonate towards the ocean bottom".

Coccolithophores are a major contributor to the carbonate in deep sea sediments. In the Northeast Atlantic during the last glacial-interglacial cycle (ice age), coccoliths make up 70-80% of the total carbonate during the warm periods, and less during glacial times.

Coccoliths are first seen at the end of the Triassic period, 200 million years ago. It is interesting that another group of tiny algae, the diatoms, make their entry into the fossil record at almost the same time. The coccolith all-time peak was in the warm inland and continental shelf seas of the Cretaceous period. They are still of huge ecological and geological importance. 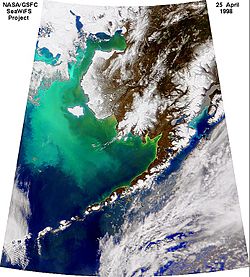 Emiliania huxlei (Ehux for short) is one of the most important planktonic algae on the planet today. It is the most common coccolithophore in the oceans of the world. It dominates in the northeast Atlantic, in the northeast Pacific and in the eastern Mediterranean. Its gigantic algal blooms are easily seen on satellite imagery. This blooming life-style started between ~80,000 and 50,000 years ago, and marks the start of the so-called Ehux Acme zone in the fossil record.

Ehux is only seen in relatively young sediments, and must have evolved fairly recently. The first appearance of Ehux in the sediment is used as a biostratigraphic marker. This appearance was dated to ~270,000 years ago. Later, Weaver dated it at ~242–268,000 years ago.

All content from Kiddle encyclopedia articles (including the article images and facts) can be freely used under Attribution-ShareAlike license, unless stated otherwise. Cite this article:
Coccolith Facts for Kids. Kiddle Encyclopedia.